Within a dinosaur’s head: ankylosaur was sluggish and deaf

German and Austrian scientists took a closer look at the braincase of a dinosaur from Austria. The group examined the fossil with a micro-CT and found surprising new details: it was sluggish and deaf. The respective study got recently published in the scientific journal scientific reports. Ankylosaurs could grow up to eight meters in body length and represent a group of herbivorous dinosaurs, also called 'living fortresses': Their body was cluttered with bony plates and spikes.
Psychology - Jan 7

Engaging with traditional media not associated with happiness or anxiety levels. Consuming traditional forms of media - including books, music and television - has little effect on short-term adult well-being, according to a new study by researchers from the University of Oxford and the University of Vienna, published in Nature Scientific Reports.

By analyzing ancient DNA an international team of scientists with participation of Ron Pinhasi's team of the University of Vienna was able to retrace the world's oldest family tree.

The role of bitter receptors in cancer

Bitter taste receptors do not only support humans in tasting. They are also found on cancer cells.

The use of a routine before performance provides substantial advantage in sports.

Bacteria rapidly modify mobile parts of their genome to develop resistance to viruses.

With observations of one of the closest star-forming regions to the sun a team of international astronomers discovered the largest population of free-floating planets.

New State of Matter: Crystalline and Flowing at the Same Time

Through their research efforts, the team was able to finally disprove an intuitive assumption that in order for two particles of matter to merge and form larger units (i.e.

In quantum mechanics, not even time flows as you might expect it to

The boundary between forward and backward blurs in quantum mechanics.

How to decode the meaning of melodies in animal vocalizations

Evolution led to similarities in the melodies of animal vocalizations and human languages.

Why do humans possess a twisted birth canal?

Break through the tumor’s protective shield

A team at the Department for Pharmaceutical Sciences developed a therapy concept that could stop tumor growth. 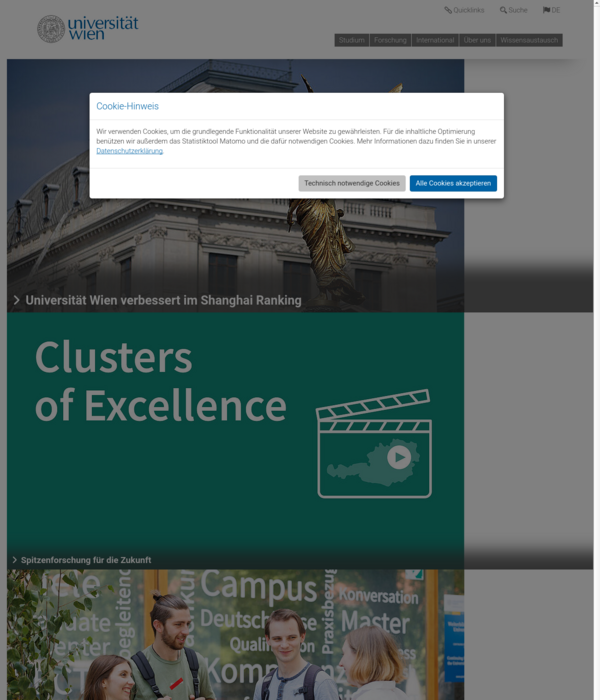