Bacteria found on common UK trees may act as a sink for air pollution, research finds

Life Sciences - May 25
Bacteria found on the leaves of common UK tree species may remove toxic carbon monoxide (CO) from the air, according to researchers from the University of Warwick. Carbon monoxide is found in small amounts throughout the atmosphere, produced by incomplete burning of fossil fuels, as well as from natural processes.
Health - May 18

Antibiotics given to women before a caesarean birth have no effect on the risk of early childhood conditions, such as asthma or eczema, suggests a study by researchers at the Universities of Warwick and Birmingham.

When a cell divides abnormally, it does not share the correct number of chromosomes with the two new cells, and this can lead to cancer.

Western Balkans expert Dr Andi Hoxhaj is one of the contributors to the 2022 Freedom House Nations in Transit Report, an annual expert assessment of the state of democracy in the region stretching from Central Europe to Central Asia [ published today].

Here is the news - Coventry residents invited to travel back in time with Coventry on TV, the latest event from the Ghost Town TV archives project

Coventry residents will be able to travel back in time thanks to an exclusive compilation of archive TV news and other documentary footage, brought together by researchers at the University of Warwick, and on show for three days in the city centre.

New scientific analysis of the composition of Roman denarii has brought fresh understanding to a financial crisis briefly mentioned by the Roman statesman and writer Marcus Tullius Cicero in his essay on moral leadership, De Officiis, and solved a longstanding historical debate.

Laws governing weddings are outdated and too restrictive in contemporary society

Current laws governing weddings are too outdated and restrictive and do not reflect the diversity of faith and beliefs in modern society, a new report from experts at the Universities of Warwick and Exeter highlights.

17 May 2022 Where could you learn the choreography from Bridgerton , try your hand at stage combat and witness the skill and thrill of aerial acrobatics? All this and more will be on offer as part of FAB Fest - an event celebrating the University of Warwick's brand new Faculty of Arts Building (FAB), taking place on Friday 20 May.

Study sheds new light on the origin of civilisation

More than one in five top earning bankers has benefited from non-dom status, finds new report

Celebration for Coventry’s Kare Adenegan at the University of Warwick

An official celebration marking the success of Coventry Paralympian Kare Adenegan has been held at the University of Warwick. Ms Adenegan, who is a third year history student at Warwick, returned from the postponed Tokyo 2020 Paralympics with two silver medals which she won in the T34 wheelchair 100m and 800m events. 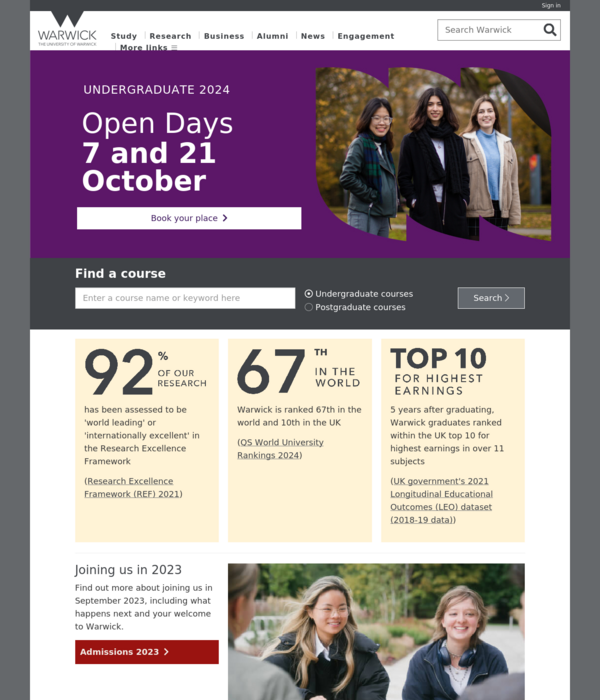