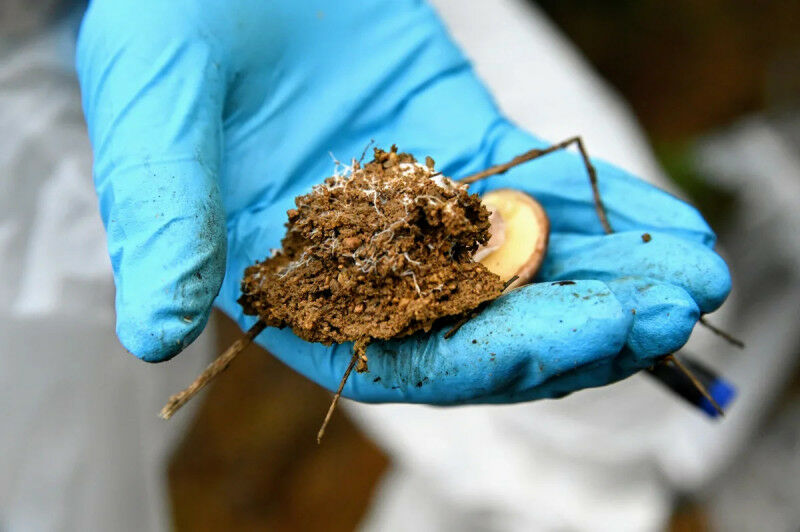 Thursday, May 19, 2022 — The wood wide web has been a hot topic among biologists in recent years. Trees and plants are interconnected and not only share information, they also support each other by passing on signals or food. They do this by means of mycorrhizal fungi that live in symbiosis with the roots. Prof Joske Ruytinx of the Vrije Universiteit Brussel studies how these fungi operate, and especially how they deal with soil pollution, radioactivity, climate change and the adverse effects of modern agriculture.

Ruytinx: "Some fungi are able to adapt quickly to stressful situations, such as heavy pollution by metals or radioactivity. If they then connect with certain trees, you can see new vegetation emerging and ecosystems recovering."

Almost all plants form an alliance with mycorrhizal fungi. These are a group of network-forming soil fungi that enable plants to establish themselves in diverse environments. Their underground networks of fungal threads, known as mycelium, connect the plants to each other, regulate access to nutrients and keep potentially toxic substances out as much as possible. They protect the plant against disease and improve water absorption. These networks made the evolution of land plants possible in the first place, as the first land plants did not have real roots. Mycorrhizal fungi are thus partly responsible for life on earth as we know it. In exchange for their services, they receive carbon (sugars and fats) from the plant.

There are various types of mycorrhiza. Each has its own connection with a plant and differs in its potential to collect nutrients and store carbon.

Fungal networks are essential for life on earth, but they are being disrupted and destroyed. The biggest threats are climate change and agriculture. Forest fires, floods, droughts and agriculture all reduce the species diversity of these fungi. Frequent ploughing breaks the underground fungal network, while limited above-ground diversity and excessive use of fertilisers and pesticides have caused agricultural soils to die.

Ruytinx: "We are actually making our modern agricultural crops lazy. Growing up in an environment protected by pesticides and feeding them with fertiliser makes it difficult for them to adapt to changing conditions. Especially since they have largely lost the capacity to connect to an underground fungal network. After all, why would they supply the fungi with carbon if they do not need their services?"

This is not without consequence. By destroying underground fungal networks, we destabilise our ecosystems and lose access to an efficient system of nutrient recycling and carbon storage.

Ruytinx and her own international and interdisciplinary networks now want to combine research and knowledge to map the adverse effects of agriculture and climate change and thus contribute to the transition to a different kind of agriculture, one that could be more resilient in times of climate change. It involves research into, for example, above-ground networks that maintain biodiversity, the role of insects, other types of fertilisation, etc. Ruytinx focuses on the resilience of fungi.

Ruytinx: "Fungi have an enormous adaptive capacity and this kingdom is home to many extremophiles. These are species that are able to adapt perfectly to adverse conditions. Just think of young pines that colonise disturbed areas with the help of their typical partner. From historically metal-polluted soils in the northern Kempen to recently contaminated soils in Fukushima, Suillus luteus, the slippery jack bolete is present and ’ready to rescue’. This species shows enormous diversity in its stress tolerance, with differences in the genome at the basis of specific genotypes being selected under stress conditions. With partner institutions, we are investigating why this happens and what impact it has on the symbiosis, stress tolerance and evolution of the host plant. Using that knowledge, we will hopefully be able to use them effectively to reform forestry and agriculture, and protect and restore ecosystems."

The research into contamination by radioactivity is being carried out with the Belgian Nuclear Research Centre (SCK-CEN), Fukushima University and UHasselt. The research in the northern Kempen is a collaboration with UC Denver, University of Florida Gainesville, Joint Genome Institute and UHasselt. Research on agricultural biodiversity is approached in an interdisciplinary way by various research groups at VUB.

Whales learn songs from each other in a cultural ’deep dive’ - 01.07

Related Stories
Agronomy / Food Science
Here’s what you need to know about the Varroa mite - 04.07

Happy at work, local farmers? - 30.06
This site uses cookies and analysis tools to improve the usability of the site. More information. |