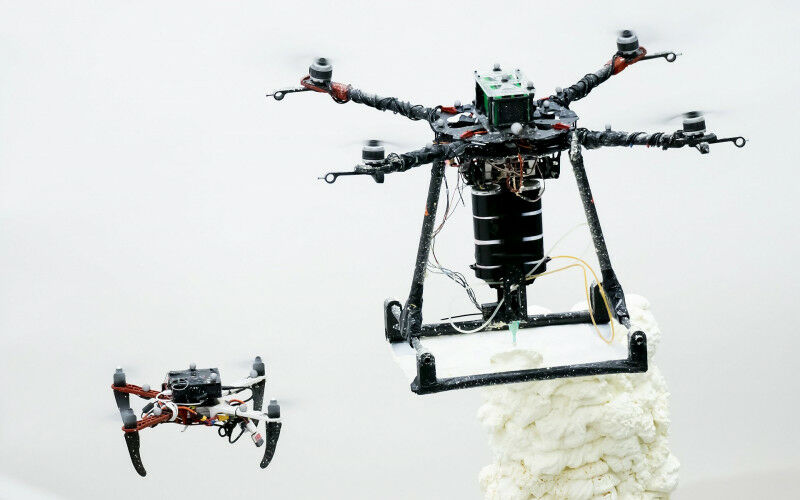 Drones as 3D printers: An international research group used a swarm of such autonomous flying robots to print structures from a custom-designed cementitious material. A team led by Stefan Leutenegger, Professor of Machine Learning in Robotics at TUM, ensured that the drones could perform the necessary precise flight maneuvers.

An international team of researchers have created a fleet of bee-inspired flying 3D printers for building and repairing structures in-flight. The technology could ultimately be used for manufacturing and building in difficult-to-access or dangerous locations such as tall buildings or help with post-disaster relief construction, say the researchers.

3D printing is gaining momentum in the construction industry. Both on-site and in the factory, static and mobile robots print materials for use in construction projects, such as steel and concrete structures. In Nature, an international team of researchers describes Aerial Additive Manufacturing (Aerial-AM), a new approach to 3D printing using flying robots that use collective building methods inspired by natural builders like bees and wasps. The drones work co-operatively from a single blueprint, adapting their techniques as they go. They are fully autonomous while flying but are monitored by a human controller who checks progress and intervenes if necessary, based on the information provided by the drones.

The team was led by Imperial College London and Empa, the Swiss Federal Laboratories of Materials Science and Technology. Stefan Leutenegger , Professor of Machine Leaning for Robotics at the Technical University of Munich (TUM) since 2021 and a Reader at Imperial, is one of the project’s principal investigators. "The big challenge my team and I were tackling was to make the drones navigate very precisely, which includes the use of on-board sensors - such as cameras - to accurately map and adapt to the structure they are printing," said Prof. Leutenegger. Lead author Prof. Mirko Kovac, of Imperial’s Department of Aeronautics and Empa’s Materials and Technology Center of Robotics said: "We’ve proved that drones can work autonomously and in tandem to construct and repair buildings, at least in the lab. Our solution is scalable and could help us to construct and repair buildings in difficult-to-reach areas in the future."

The Aerial-AM fleet consists of so-called BuilDrones, which deposit materials during flight, and quality-controlling ScanDrones that continually measure the BuilDrones’ output and inform their next manufacturing steps. To test the concept, the researchers developed four bespoke cementitious mixtures for the drones to build with. Throughout the build, the drones assessed the printed geometry in real time and adapted their behavior to ensure they met the build specifications, with manufacturing accuracy of five millimeters.

The proof-of-concept prints included a 2.05-meter high cylinder printed in 72 layers with a polyurethane-based foam material, and a smaller cylinder (18 cm)printed with a custom-designed structural cementitious material. The technology offers future possibilities for building and repairing structures in tall or other hard-to-access locations. Prof. Kovac said: "We believe our fleet of drones could help reduce the costs and risks of construction in the future, compared to traditional manual methods."

Stefan Leutenegger will continue his robotics research at TUM. For a current project, he will join forces with Kathrin Dörfler , Professor for Digital Fabrication at TUM. Their project "Spatial AI for Cooperative Construction Robotics" will start in October. One of the goals is to teach robots to navigate and make sense of actual building sites with all their changing structures and machinery and workers constantly moving about. "We want to help robots to cooperate safely", says Stefan Leutenegger, "with one another and with humans". Future projects will combine these new approaches with additive manufacturing technologies as described in the current research paper.