ASD: Towards a Better Understanding of the Molecular Mechanisms of Autism 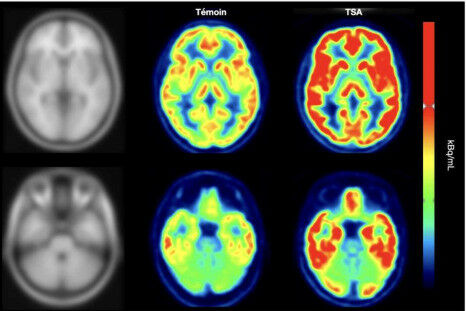 Images showing the human brain anatomy in two axial slices obtained by MRI (left), then the corresponding molecular images showing a larger number of mGluR5 receptors in the brain of an adult subject with ASD (right) compared to a control subject (middle). © Laurent Galineau
While great progress has been made in recent years in the understanding of autism spectrum disorder (ASD), its underlying molecular mechanisms remain fairly poorly documented. Several hypotheses have been put forward regarding the possible dysfunction of certain neurotransmitters in the brain, but rigorous scientific studies are still lacking in order to validate them. In a new publication, researchers from Inserm and Université de Tours at the Imaging & Brain unit have shown that specific receptors of glutamate, one of the most important neurotransmitters in the nervous system, are expressed in large quantities in the brains of adults with ASD. However, this overexpression of the receptors does not occur at earlier stages of development. The study, sponsored by Tours university hospital and published in Molecular Psychiatry , paves the way for a better understanding of ASD to help refine therapeutic research.

Autism spectrum disorder (ASD) is caused by neurodevelopmental particularities and affects around 700 000 people in France. This term brings together a large variety of clinical realities and as such a large variety of specific individual needs. The development of treatments that specifically target severe autism-related disorders has long been hampered by a piecemeal understanding of the underlying molecular and genetic mechanisms.

At present, those affected may therefore use treatments for potential comorbidities such as sleep disorders or epilepsy, but there is no therapeutic solution to improve behavioral disorders or the associated alterations in social interactions.

One avenue put forward to explain the development of ASD is dysfunction of glutamate - the main excitatory neurotransmitter of the central nervous system. Studies have recently suggested that glutamate receptors called mGluR5 (see inset) are expressed in increased quantities in certain brain regions in people with ASD.

mGluR5 is a receptor that is abundantly expressed in the central nervous system and particularly in the cerebral cortex, hippocampus, lateral septum, dorsal striatum, and nucleus accumbens, which are all brain regions involved in cognition, motor control and emotivity.

mGluR5 belongs to a subgroup of eight receptors that are activated by glutamate, the main excitatory neurotransmitter of the central nervous system.

Pharmacological intervention on these receptors, particularly mGluR5 blockade, is already being evaluated for various disorders such as anxiety, depression, schizophrenia, Parkinson’s disease, and addictions.

In order to further understand the molecular mechanisms of ASD, Frédérique Bonnet-Brilhault’s team at the Imaging & Brain unit (unit 1253 Inserm/Université de Tours) sought to better characterize glutamate dysfunction in the brains of adults with ASD.

They started by quantifying the glutamate levels in the cingulate cortex of 12 adults with ASD and 14 adults without ASD (referred to as "control” participants), using several methodological approaches. Next, they looked at the expression of the mGluR5 receptors in the participants’ brains.

The scientists observed that the glutamate levels varied widely in the adults with ASD. However, they found that the quantity of mGluR5 receptors expressed was particularly high in the brains of all these individuals, compared to the controls.

Then, to better understand how the quantity of mGluR5 varies at different stages of development, the team also quantified these receptors in the brains of young rats, grouped into animal models of ASD and "control” animals.

The fact that mGluR5 receptors are expressed in large quantities in the adult human participants with ASD, but not at the earliest stages of development in the animal models, suggests that the overexpression of these receptors is not a cause of this disorder, but rather a consequence that emerges progressively throughout life.

"Our findings suggest that the changes in the quantity of mGluR5 receptors expressed during development could be a compensatory mechanism for the early dysfunction in the brain communication systems, rather than a primary element that causes the development of ASD,” explains Bonnet-Brilhault.

At a time when research in adults with ASD is a real priority, this work points to the need to understand the development trajectory of each individual with ASD to distinguish the causes of the adaptation mechanisms.

An overview of ASD

"Typical” autism, described by the child psychiatrist Leo Kanner in 1943, is now part of much broader group, known as Autism Spectrum Disorder (ASD), a term that takes better account of the diversity of the situations. ASD is characterized by:

ASD can also be associated with other conditions, such as anxiety disorders, sleep problems, motor function deficits, or epilepsy.

Within this wide range of clinical diversity, it is important to identify the "strengths” or "talents” that may result from this atypical brain development. The development of therapies must therefore target what corresponds to the individuals’ complaints while preserving their specific characteristics.

recruit.myScience
f
Share
Like
Related Stories
Life Sciences
The University of Valencia and FISABIO identify the remains of 17 victims of Francoism in the graves of Paterna - 28.01

Hope for patients with a severe rare disease - 26.01

Related Stories
Health
The satirical press of Valencia went from criticising the measures against cholera in the 1885 epidemic to denouncing social vulnerability - 27.01