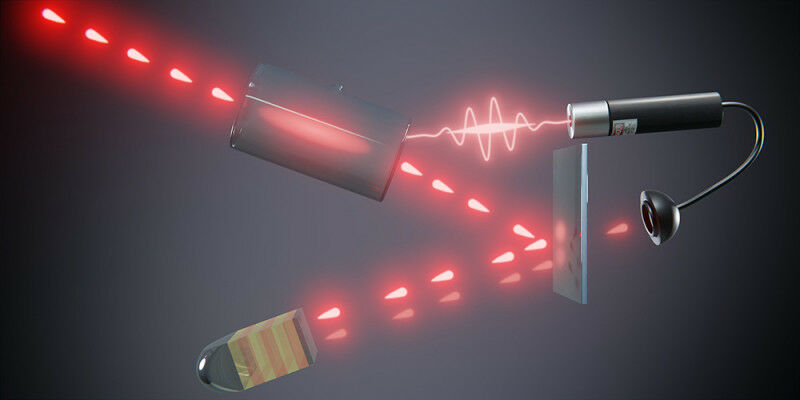 A particle of light from the single photon source (below) is stored in the vapor cell (above). A simultaneously emitted second photon is revealed by a detector (right), which triggers the control laser pulse and thereby initiates the storage process.

In quantum communication networks, information is transmitted by single particles of light (photons). At the nodes of such a network buffer elements are needed which can temporarily store, and later re-emit, the quantum information contained in the photons.

Researchers at the University of Basel in the group of Prof. Philipp Treutlein have now developed a quantum memory that is based on an atomic gas inside a glass cell. The atoms do not have to be specially cooled, which makes the memory easy to produce and versatile, even for satellite applications. Moreover, the researchers have realized a single photon source which allowed them to test the quality and storage time of the quantum memory. Their results were recently published in the scientific journal PRX Quantum.

"The suitability of warm atoms in vapor cells for quantum memories has been investigated for the past twenty years", says Gianni Buser, who worked on the experiment as a PhD candidate. "Usually, however, attenuated laser beams - and hence classical light - were used". In classical light, the number of photons hitting the vapor cell in a certain period follows a statistical distribution; on average it is one photon, but sometimes it can be two, three or none.

To test the quantum memory with "quantum light" - that is, always precisely one photon - Treutlein and his co-workers developed a dedicated single photon source that emits exactly one photon at a time. The instant when that happens is heralded by a second photon, which is always sent out simultaneously with the first one. This allows the quantum memory to be activated at the right moment.

The single photon is then directed into the quantum memory where, with the help of a control laser beam, the photon causes more than a billion rubidium atoms to take on a so-called superposition state of two possible energy levels of the atoms. The photon itself vanishes in the process, but the information contained in it is transformed into the superposition state of the atoms. A brief pulse of the control laser can then read out that information after a certain storage time and transform it back into a photon.

"Up to now, a critical point has been noise - additional light that is produced during the read-out and that can compromise the quality of the photon", explains Roberto Mottola, another PhD candidate in Treutlein’s lab. Using a few tricks, the physicists were able to reduce that noise sufficiently so that after storage times of several hundred nanoseconds the single photon quality was still high.

"Those storage times are not very long, and we didn’t actually optimize them for this study", Treutlein says, "but already now they are more than a hundred times longer than the duration of the stored single photon pulse". This means that the quantum memory developed by the Basel researchers can already be employed for interesting applications. For instance, it can synchronize randomly produced single photons, which can then be used in various quantum information applications.