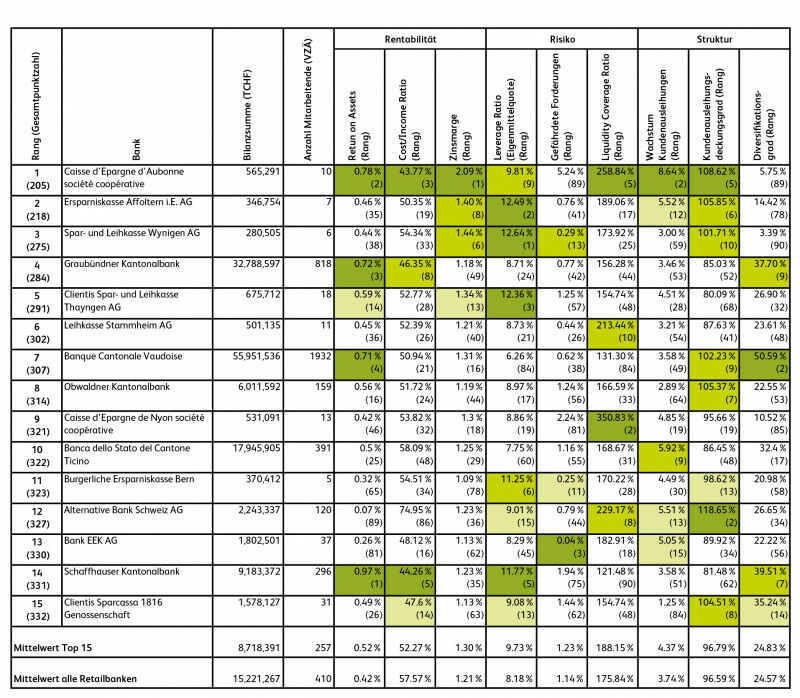 The HSLU ranking of the best retail banks in Switzerland shows: Small banks in particular show very good values. The banks in the top three places have balance sheet totals of between just CHF 280 and 565 million. To determine the ranking, the HSLU research team analyzed the annual financial statements of 90 institutions .

One in ten people in Switzerland already uses a smartphone bank. Although such neo-banks have so far only been used as secondary and third-party banks, they could also challenge the established banks’ status as principal bankers in the future. This is the result of a study by the Lucerne University of Applied Sciences and Arts on the Swiss retail banking market.

Smartphone banks are mostly young technology companies that initially offer basic services very cheaply and without a branch. A representative population survey shows that around ten percent of the Swiss population already use smartphone banks - that’s up to 900,000 people in Switzerland. The level of awareness of these banks is also already high. 43 percent of the people surveyed know at least one smartphone bank. The apps of the smartphone banks have therefore now reached the population. In the meantime, they are also being used for far more than just payment transactions during the vacations. More than a third of all users open a corresponding app at least once a day.

In the view of Andreas Dietrich, Professor of Banking and Finance at the Lucerne University of Applied Sciences and Arts, this poses challenges for established banks: ’Our analysis shows that the clientele of smartphone banks recommend them much more frequently than their house bank and that the customer base of smartphone banks is therefore continuing to grow rapidly.’ According to Dietrich, smartphone banks have so far generally been used as a second or third-party bank and are therefore a supplement to, rather than a replacement for, existing banking relationships. However, the survey showed that many users of smartphone banks can imagine having their main banking relationship with providers such as Neon, Zak or Yuh in the future instead of with regional banks, Raiffeisen banks or cantonal banks.

In Switzerland, every second household invests in securities. This is shown by a representative population survey on the topic of "investing". The subjectively perceived economic situation (income, assets), as well as fear and ignorance, are key reasons why people decide not to invest their money. Among those who do invest, the proportion of women (40 percent) is significantly lower than that of men (60 percent). People with higher incomes and assets, higher levels of education and those living in German-speaking Switzerland are also more likely to invest.

Every fifth non-investing person in Switzerland can imagine investing in the future. This corresponds to a potential of around 550,000 to 600,000 people in Switzerland. According to the study authors, however, the financial literacy of the Swiss population would have to be improved in order for people to increasingly invest.

Swiss banks’ lending volume of 1.3 trillion Swiss francs is almost double Switzerland’s gross domestic product. Bank loans therefore contribute significantly to the financing of the Swiss economy - and co-finance the environmental impact of companies and individuals. According to the study authors, it is therefore important for retail banks that have anchored sustainability strategically to increasingly focus on sustainable financing in addition to sustainable investments. On the one hand, it is essential to assess the sustainability of borrowers holistically by evaluating not only the collateral but also the purpose of the loan. On the other hand, it is of great importance to analyze which concrete sustainability measures can limit credit risks and which are primarily driven by value concepts. With a view to the effectiveness of interest rate reductions, targeted price reductions are sensible, for example on the loan amount used for the replacement of fossil energy systems with renewable energy sources.

The HSLU research team examined the financial statements of 90 institutions. Based on nine key figures, the best retail bank from a financial perspective was determined (see tables in the appendix). Overall, most key figures are stable and the financial condition of Swiss retail banks can be described as good. Small banks in particular continue to perform very well, which is also reflected in the ranking. The banks in the top three places have balance sheet totals of between just 280 and 565 million Swiss francs.

The HSLU study shows that there are significant regional differences between the market regions of the banks. Banks in the Lake Geneva region, for example, have the highest interest margins and the best profitability, while banks in central Switzerland report comparatively above-average efficiency ratios.

Proportion of women on banks’ boards of directors on the rise

The proportion of women on the boards of directors of banks continues to rise. Among the 518 board members, 141 were women as of June 2022 (previous year 132). Co-study author Christoph Lengwiler comments: ’The fact that women accounted for an average of 34 percent of the 349 new BoD members elected since 2015 suggests a further increase in the proportion of women on retail bank boards.’

As the analysis of newly elected board members since 2015 shows, around ten percent of all newly elected members leave the board within three years. This obviously poses a number of challenges when it comes to the optimal selection of personnel for the board of directors," says Lengwiler.

For the eleventh time, the ’IFZ Retail Banking Study 2022’ of the Institute of Financial Services Zug IFZ of the Lucerne University of Applied Sciences and Arts examines the core business of domestic-oriented banks. The current edition of the study analyzes, on the one hand, the spread of smartphone banks in Switzerland and, on the other hand, the share of (non-)investors in the population and explains why which population groups invest or not. In addition, the study discusses the topic of sustainable financing at banks, shows the best financial ratios of the banks and how the corporate governance of retail banks stands.

Iron for energy storage - 02.12
This site uses cookies and analysis tools to improve the usability of the site. More information. |