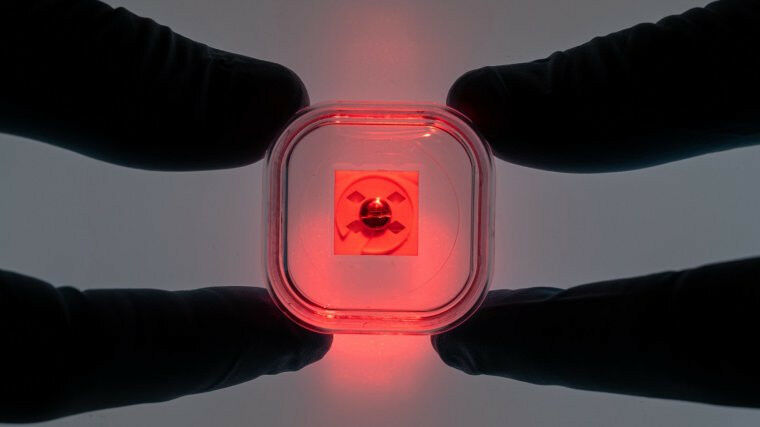 An international research team led by Tomoki Nakamura (Tohoku, Japan) has studied soil samples collected by the Japanese spacecraft Hayabusa-2 on the asteroid Ryugu. Falko Langenhorst of Friedrich Schiller University in Jena, Germany, was part of the group that gained insights into the formation of the asteroid and the unique processes that took place during the first five million years after the birth of our solar system from the analysis of the extraterrestrial material.

Prof. Langenhorst has already had dust from the asteroid Itokawa, matter from Martian meteorites and interstellar dust collected in space by the NASA probe ,,Stardust" under his microscope. Most recently, his expertise as a meteorite scientist made him a member of a select international research team on the ,,Hayabusa-2" space probe mission to the asteroid Ryugu. Under the transmission electron microscope the Jenaer researcher examined minerals in the fragments of the stony small planet, which permit very concrete statements in astronomical dimensions to the "hour of birth" of the asteroid. What happened when and where in our solar system is now reported by the "Stone" team for the first time in an article in "Science".

Asteroids contain important information about the beginning of our solar system

Sometimes they are only slightly larger than a car, but sometimes they are chunks of rock one or more kilometers in diameter that orbit the sun on fixed orbits. We are talking about asteroids or planetoids, millions of which orbit our solar system. 90 percent of them are traveling in the so-called asteroid belt between the planets Jupiter and Mars, but some come much closer to the sun and thus also to Earth. One of the so-called near-Earth asteroids is "Ryugu," a chunk of rock about a kilometer in diameter that resembles a cobblestone standing on a corner. For its flight around the sun at a distance of 0.96 to 1.42 astronomical units, it takes 474.5 days and also crosses the Earth’s orbit. This makes it a particularly interesting research object for astro-science.

Celestial bodies such as asteroids, or the meteorites that originate from them, are so fascinating because they provide us with unique information about the beginnings of our solar system," says Langenhorst. The professor of analytical mineralogy of micro- and nanostructures at the University of Jena has long been involved in analyzing matter from space down to the smallest detail in order to help elucidate the processes involved in the formation and formation of our solar system.

Jena expertise for meteorites and asteroids

He was already involved in NASA’s "Stardust" mission to a comet in 2006. Langenhorst’s expertise as an astro-mineralogist was also in demand for the first mission of a Japanese space probe to the asteroid Itokawa, which was launched in 2003. The probe was named after the sharp-eyed peregrine falcon ,,Hayabusa". The Jena native was part of the international team that examined extraterrestrial dust from the Itokawa surface, which the probe brought to Earth in 2010. It isfascinating to hold material in your hand that comes from a celestial body that has been orbiting in space for millions of years," admits Langenhorst. Unlocking the secrets of these grains of dust is what drives him time and again.

His participation in the Hayabusa-2 mission research team has now been requested again by his Japanese colleagues. In 2014, the Japan Aerospace Exploration Agency (JAXA) designated the asteroid Ryugu as the target of its Hayabusa-2 mission. After several years of flight, the spacecraft reached the minor planet Ryugu and in 2018 not only sent amazing photos of the celestial body back to Earth, but also brought back rock material from it two years later."While Hayabusa 1 had collected swirled dust, the largest grain of which was about 0.3 millimeters small, this time the probe brought back to Earth numerous fragments of Ryugu several millimeters in size," Langenhorst explains. His task was to identify the minerals in the rock fragments from Ryugu and to analyze the distribution of the chemical elements in them.

Asteroid Ryugu is not a compact boulder, but a pile of shards

I worked with a transmission electron microscope, which revealed amazing details of the material with a resolution of less than a nanometer," he explains.We found that Ryugu is a so-called rubble pile asteroid. The rock is not compact, but consists of innumerable, quasi caked together rock shards", Langenhorst describes his observations. This allows the conclusion that today’s asteroid Ryugu was formed from the debris of an impact on an originally much larger primordial asteroid. 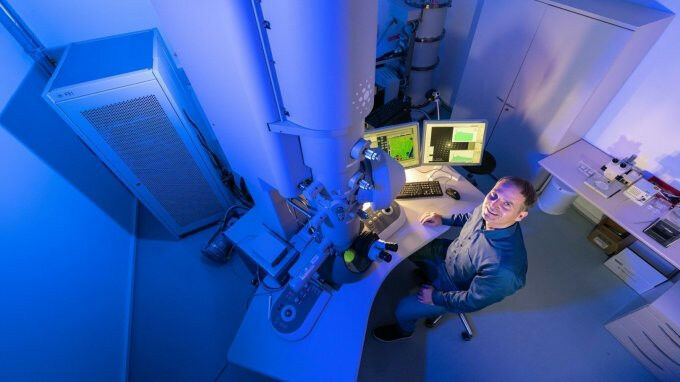 The crystal structure and composition of the minerals are an archive of the asteroid nursery.

The researchers also found evidence that the "nursery" of Ryugu was not located in the central region of our solar system, where the asteroid moves today, but in the outer region of the solar system.There temperatures prevail clearly under the freezing point, thereby water and other light molecules like methane and ammonia condense to iron and agglomerate with mineral dust to ’dirty snowballs’, the comets. However, because short-lived radioactive elements were also involved in the early phase of the solar system, Ryugu warmed up relatively quickly after agglomeration, causing the ice to melt and mineral reactions to begin," Langenhorst explains. It is conceivable that Ryugu was a comet in the past. When it approached the sun, the water evaporated, so to speak, and the solid dust remained.

The Hayabusa-2 team made new discoveries in this regard. One of its colleagues discovered a water inclusion in a dust grain from the asteroid that contained organic molecules as well as carbonic acid and salt. Others found one-thousandth of a millimeter small spheres of organic material in the extraterrestrial rock.

Comparable one knew from investigations at a meteorite named Ivuna, which was found 1938 in Tanzania, and which belongs to the group of the carbonaceous Chondrites. Ivuna is confusingly similar to our Ryugu", he reports. The carbonaceous chondrites, so the scientist explains, are the oldest rocks of our solar system. "As primordial matter, they best reflect the composition of our solar system."

The new findings about the evolution and diversity of the minerals and other components of the Ryugu soil samples now enable the researchers to make statements about the time when the asteroid was formed and developed.We suspect that Ryugu is descended from an older large asteroid. This primordial asteroid formed within only two million years after the birth of the solar system in its outer region, where water and molecules other than ice were present. Under radioactive heating, the ice melted, and in this process of aquatic alteration, new minerals such as phyllosilicates, carbonates, and iron oxides crystallized in the primordial asteroid. All these processes were finished after only about five million years. After that, the cosmic collision occurred, during which parts of the primordial asteroid were blown off, from which the new asteroid Ryugu formed," Langenhorst summarizes the results of the research team.

Even though we are getting better at elucidating processes from the early days of our solar system, it is unlikely that we will ever be able to completely solve the riddles surrounding the beginning of our solar system," he admits. However, the fact that he is currently working on other astro-mineralogical topics shows that one should not be entirely sure.

The distance to the Moon and the length of the day 2.46 billion years ago - 27.09
RHEA Luxembourg leads international partnership with ESA on QKD - 26.09
Deep space: Massive light burst detected on Earth came from ’infant’ Universe - 26.09