Watching how cells deal with stress 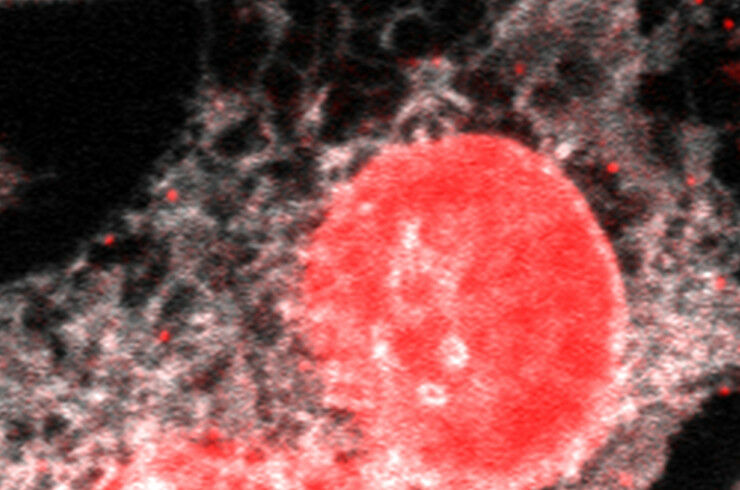 FMI researchers developed an imaging approach that allowed them to visualize individual molecules involved in the cell’s response to stress.

When a cell is exposed to stressors such as toxins, it switches on pathways aimed at repairing damage.

One of these pathways is called the ’unfolded protein response’, which senses unfolded or misfolded proteins in the endoplasmic reticulum — a cell organelle designated for folding proteins destined to other organelles or to be secreted by the cell.

The unfolded protein response relies on the enzyme IRE1a, which binds transcripts of the gene XBP1 and modifies them on the surface of the endoplasmic reticulum. Once modified, XBP1 transcripts are translated into proteins that travel to the nucleus and turn on genes involved in assisting protein folding and quality control.

Scientists led by Franka Voigt, a researcher in the Chao group at the FMI, developed an imaging approach that allowed them to take snapshots of individual XBP1 transcripts on the surface of the endoplasmic reticulum. This approach allowed the researchers to investigate how XBP1 transcripts are recruited and modified by IRE1a.

The findings will help to better understand how cells respond to stress.

The project is a collaboration between the FMI and the University of Navarra in Spain.

Franka Voigt was born and grew up in the German state of Saxony-Anhalt. After getting her Diploma from the University of Goettingen, she went on to complete a PhD at the European Molecular Biology Laboratory in Heidelberg. Franka joined the FMI in July 2015 as a postdoctoral fellow in the Chao group. She is passionate about visualizing molecular processes in living tissues and has developed tools that allow researchers to visualize single RNA molecules in organoids. Franka enjoys running and has been a long-time member of the FMI running team.

Understanding how rechargeable aqueous zinc batteries work - 08.08
This site uses cookies and analysis tools to improve the usability of the site. More information. |