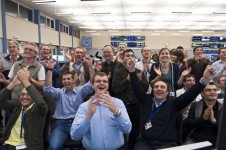 CERN’s Large Hadron Collider has today become the world’s highest energy particle accelerator, having accelerated its twin beams of protons to an energy of 1.18 TeV in the early hours of the morning of 30 November. This exceeds the previous world record of 0.98 TeV, which had been held by the US Fermi National Accelerator Laboratory’s Tevatron collider since 2001. It marks another important milestone on the road to first physics at the LHC in 2010.

“We are still coming to terms with just how smoothly the LHC commissioning is going,” said CERN Director General Rolf Heuer. “It is fantastic. However, we are continuing to take it step by step, and there is still a lot to do before we start physics in 2010. I’m keeping my champagne on ice until then.”

These developments come just 10 days after the LHC restart, demonstrating the excellent performance of the machine. First beams were injected into the LHC on Friday 20 November. Over the following days, the machine’s operators circulated beams around the ring alternately in one direction and then the other at the injection energy of 450 GeV, gradually increasing the beam lifetime to around 10 hours. On Monday 23 November, two beams circulated together for the first time, and the four big LHC detectors recorded their first collision data.

This achievement brings further confirmation that the LHC is progressing smoothly towards the objective of first physics early in 2010. The world record energy was first broken yesterday evening, when beam 1 was accelerated from 450 GeV, reaching 1050 GeV (1.05 TeV) at 21:48, Sunday 29 November. Three hours later both LHC beams were successfully accelerated to 1.18 TeV, at 00:44, 30 November.

“I was here 20 years ago when we switched on CERN’s last major particle accelerator, LEP,” said Accelerators and Technology Director Steve Myers. “I thought that was a great machine to operate, but this is something else. What took us days or weeks with LEP, we’re doing in hours with the LHC. So far, it all augurs well for a great research programme.”

Next on the schedule is a concentrated commissioning phase aimed at increasing the beam intensity before delivering good quantities of collision data to the experiments before Christmas. So far, all the LHC commissioning work has been carried out with a low intensity pilot beam. Higher intensity is needed to provide meaningful proton-proton collision rates. The current commissioning phase aims to make sure that these higher intensities can be safely handled and that stable conditions can be guaranteed for the experiments during collisions. This phase is estimated to take around a week, after which the LHC will be colliding beams for calibration purposes until the end of the year.

First physics at the LHC is scheduled for the first quarter of 2010, at a collision energy of 7 TeV (3.5 TeV per beam).

Magnonic nano-fibers opens the way towards new type of computers - 01.07

Quantum fluctuations can jiggle objects on the human scale - 01.07
This site uses cookies and analysis tools to improve the usability of the site. More information. |