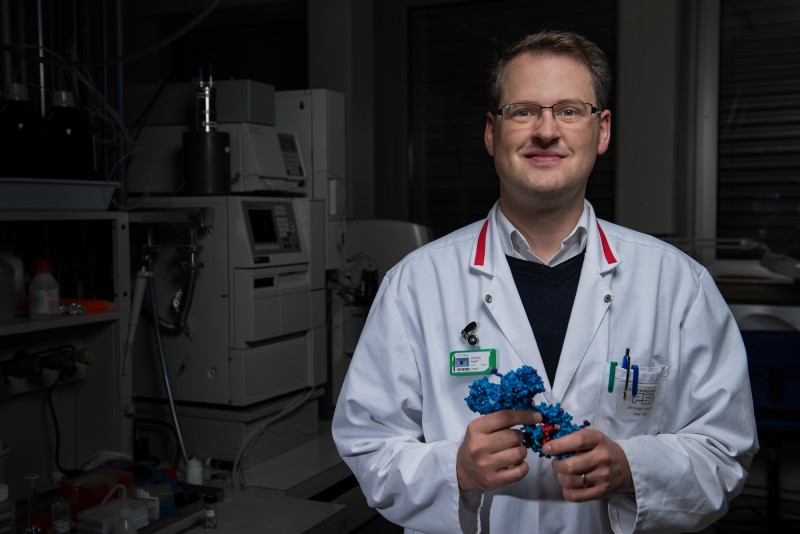 Philipp Spycher, winner of a PSI Founder Fellowship. In his hands he is holding the molecular model of an antibody. (Photo: Paul Scherrer Institute/Mahir Dzambegovic)

With a new method for modifying antibodies, drugs are developped showing more stability and, thus, having fewer side-effects.

At the time Spycher, a postdoctoral radiopharmaceutical researcher at the Paul Scherrer Institute PSI, was concerned with the question of how active agents could be bound to antibodies more efficiently. That’s because, in combination with an antibody, the active agent can target the diseased cells in the body and, thus, can take effect in the right place. With the conventional method, the active agent is chemically attached to the antibody. This process creates a mixture of different compounds, each of which binds the active ingredient to the antibody at a different site. The mixture is difficult to analyse and can cause serious side-effects. Spycher hit on the idea of pursuing another approach in which, by means of enzymes, the active ingredient can be tacked onto the antibody directly at the optimal site, precisely and without great effort. As a result, these so-called antibody-agent conjugates can be produced more rapidly and at lower cost. Also, drugs made in this way should be better tolerated and more effective.

As a child Philipp Spycher, 34, already had the urge to explore. As a teenager, he read popular science magazines such as Bild der Wissenschaft and Spektrum der Wissenschaft. From this he learned about the revolution that was taking place in life sciences: nanotechnology promised to harness nature with a precision never known before. Spycher was especially fascinated by one idea: nano-robots that destroy cancer cells. Cancer is an issue in our family , Spycher says. His grandmother and an uncle died from it. After graduation, he studied nanosciences in Basel and biomedical technology at ETH Zurich. In his doctoral research he investigated how molecules could be modified for cell studies with enzymes and, to further this research, he took a postdoctoral job at the Center for Radiopharmaceutical Sciences at PSI. Without the first class infrastructure, the supportive environment of my group and the great freedom, I would never have been able to realise my idea in this way , Spycher says. In spring 2017, he tested the idea that he had that night in Key West and discovered, surprisingly, that his approach works for all known antibodies and a large number of active agents. In June, he successfully presented his idea to the jury of the PSI Founder Fellowship. In the coming 18 months he must produce the proof-of-concept : evidence that his idea, which has been tested in the artificial environment of the laboratory, also shows the desired effect under realistic conditions. Since Spycher is confident in his new method, he intends to found a start-up company before long. For pharmaceutical companies, the start-up will better and more efficiently bind active ingredients to antibodies, but it will also develop its own drugs. Somehow, I have built a nano-robot after all , Philipp Spycher says. It’s not, however, like any robot I would have imagined when I was 14, but rather a kind of bio-robot that can fight cancer. Text: Joel Bedetti

Manchester professor to co-lead new Network in materials for quantum technologies - 11.08
This site uses cookies and analysis tools to improve the usability of the site. More information. |