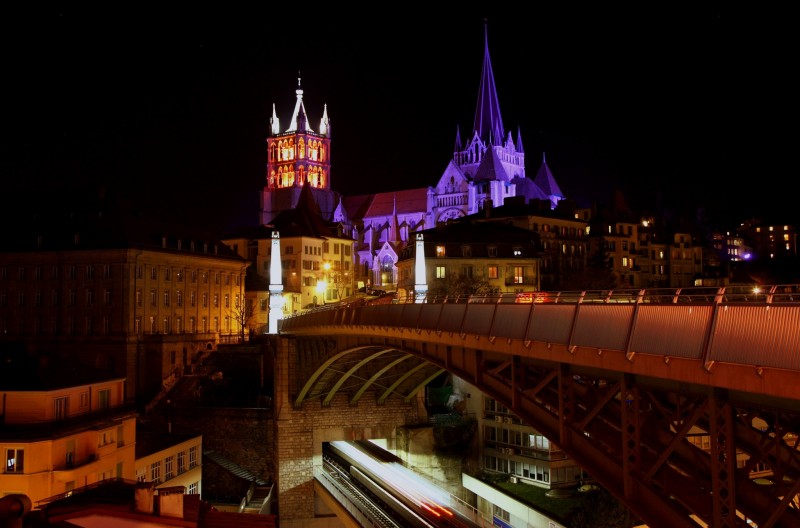 Researchers compared the geographical distribution of nearly 3,700 Lausanne residents suffering from daytime sleepiness with the noise caused by road and railway traffic in those parts of the city at night. They found a clear correlation between the amount of sleepiness reported by residents and the level of nighttime noise in their neighborhoods. These findings could be used to develop new measures for reducing urban noise pollution.


Lausanne’s traffic is the noisiest in Switzerland, often exceeding 55 decibels - the upper safety limit recommended for Europe. That’s largely due to its steep roads, which result in excessive engine noise when vehicles get moving and accelerate. For the first time, scientists from EPFL, CHUV and HUG have crossed data from 3,697 Lausanne residents who reported high levels of daytime sleepiness in a CoLaus/PsyCoLaus study with the results of a noise survey carried out by the Swiss Federal Office of the Environment (OFEV). "This research, published in the International Journal of Hygiene and Environmental Health, establishes a link between where people suffering from daytime sleepiness live and the noise caused by cars and trains passing through those areas at night. It shows that some areas of Lausanne are particularly problematic," says Stéphane Joost, a researcher at EPFL’s Laboratory of Geographic Information Systems (LASIG).

Sleep disturbances can have serious health consequences, as they can lead not only to daytime sleepiness and higher stress, but also to a greater risk of obesity, cardiovascular disease, fatigue-induced accidents, depression and other psychological disorders. For their study, the scientists mapped out the neighborhoods where people suffering from excessive daytime sleepiness live and compared that with traffic-noise data obtained from the OFEV’s sonBASE. They found distinct neighborhoods with similar levels of reported sleepiness, illustrating the effects of nocturnal noise pollution on Lausanne residents.

"Daytime sleepiness is a common complaint among the people who contact us," says Raphaël Heinzer, head of the Sleep Disorders Center at CHUV. "This study is the first to show that where a person lives can be a major contributing factor." The red zones on the scientists’ map indicate neighborhoods with both a high occurrence of daytime sleepiness and elevated levels of nighttime noise - meaning they are probably areas where residents don’t sleep very well. On the other hand, the blue zones indicate neighborhoods with low levels of daytime sleepiness. "The difference in nighttime noise between the red and blue zones is over five decibels, which is huge considering that volume doubles with every three decibels," says Joost.

Lausanne’s red zones are located primarily at the intersection of Avenue d’Echallens and Chemin de Montétan - which is especially noisy between 10pm and 6am - and below the train station near the Place de Milan. In addition, the equivalent continuous sound level (Leq) in neighborhoods near major thoroughfares and train tracks can exceed 50 decibels, which is the maximum allowed by the Swiss Federal Office of Public Health.

The study’s authors hope their work will help policymakers identify which neighborhoods can benefit the most from noise-reduction measures to improve residents’ health. "Fortunately, sleep disturbances and the resulting health problems are reversible. We can reduce nighttime noise by introducing speed limits, restricting certain kinds of vehicles, or using sound-absorbing surfaces, for example," adds Joost.

Doctors are also advocating such measures. "Improving patients’ health through urban-planning policies designed to reduce the amount of noise pollution they are exposed to is one aspect of a new field of healthcare called urban health," says Idris Guessous, a primary care physician at HUG and a coauthor of the study. "We want to build awareness among not just doctors, but also urban planners, geographers, architects, lawyers and sociologists of the role they can play in working together to improve the health of a city’s residents. Our maps were developed jointly by several public-sector institutions, and they can help local governments make better informed decisions. We hope our research will speed progress towards targeted public-health policies."

A similar study is being carried out in Geneva using data on the city’s residents collected during HUG’s Bus Santé program. Follow-up research is also planned on the Lausanne study; while that study relied on subjective data collected from answers to a questionnaire, the new research will use objective measurements of sleepiness obtained from electroencephalography (as part of a HypnoLaus study).

Changes in mobility behavior - 23.05
This site uses cookies and analysis tools to improve the usability of the site. More information. |