Drugs are consumed everywhere, but not always the same ones 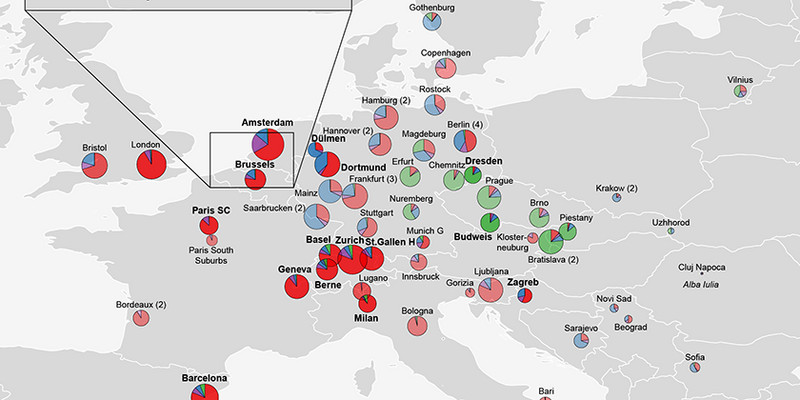 This spring, as they have now done for the past eight years, the international research team SCORE (Sewage analysis CORe group Europe), co-founded by Christoph Ort from Eawag, once again examined the wastewater from European metropolises for four illegal drugs - amphetamine, cocaine, MDMA (Ecstasy) and methamphetamine. For the first time, they have presented the data in the form of total typical daily doses depicted as pie charts on a map. This provides us with a very clear overview of what is going on: Drugs are consumed everywhere; but the preferred substance varies from place to place. The researchers detected, above all, traces of methamphetamine in the wastewater of Eastern Europe, while in North-Eastern Europe, the biggest drug consumption was of amphetamine and in Central and Southern Europe it was primarily cocaine. The findings from 2011 to 2017 have been published today in the journal "Addiction".

Every spring since 2011, the wastewater from several cities has been analysed over a period of one week as part of a project supported by the EMCDDA www.eawag.ch/typo3/#­_msocom_1 (European Monitoring Centre for Drugs and Drug Addiction). Since the project began, researchers have collected samples of wastewater from around 60 million people in 120 cities in the catchment areas of a total of 143 wastewater treatment plants. For the Swiss part of the project, the University of Lausanne and Eawag carried out the analyses and evaluations of the wastewater.

The German/French science magazine, Xenius von Arte followed our wastewater engineer Christoph Ort for a day while he collected samples from sewers and then analysed them later in the laboratory. He explains, among other things, why it is the biofilm in the sewer and not the wastewater that is significant. (Video available until 15.12.2019)

recruit.myScience
f
Share
Like
Related Stories
Pharmacology
Over the counter anti-inflammatory drugs could be damaging the health of runners - 03.07
Popular chemotherapy drug may be less effective in overweight and obese women - 03.07
Sandoz reviewing options after Federal Circuit upholds lower court ruling in biosimilar Erelzi case - 01.07
Novartis resolves legacy litigation matters, finalizing settlement of speaker program litigation with Government in the US and positioning company for the future by fully scaling its next-generation digital engagement technologies - 01.07
This site uses cookies and analysis tools to improve the usability of the site. More information. |