Researchers at EPFL and spin-off Nanolive have used a special microscope that combines two imaging technologies to observe and quantify new intracellular phenomena. In an article published today in the journal PLOS Biology, also reveals a range of computer tools that can be used in the future by other research laboratories.

A study by researchers at EPFL has cast fresh light on a range of intracellular phenomena. The team used a microscope developed by spin-off Nanolive to observe changes in cell size during division, organelle movements, and the formation of tiny lipid droplets - all over an extended period and without damaging the cell. They then quantified the observed phenomena using software specially designed to sift through the mass of raw imaging data. The study, published today in the journal PLOS Biology, paves the way for the technology to be used in other areas of scientific research.

Cells in the spotlight

The Nanolive microscope used in the study combines holotomography, which measures the three-dimensional refractive index tomogram of living cells, with epifluorescence microscopy, which relies on the light emitted by an object that has absorbed higher-energy photons. Taken together, the data paints a detailed picture of a cell’s structure and chemical composition, allowing scientists to precisely calculate dry mass, morphology, cell membrane dynamics and other features.

The label-free, non-invasive imaging technique meant the team could observe the cells over an extended period of time. But one of the microscope’s major advantages is its ability to capture several biological phenomena and objects at the same time, enabling researchers to observe organelle rotation and other complex cellular dynamics involving multiple subcellular structures. The tradeoff is that the microscope generates vast quantities of raw data - so much, in fact, that the team had to develop new algorithms to process it. "We took existing, open-source image-processing software and wrote our own programs with some basic Python code," explains Mathieu Frechin, head of quantitative biology at Nanolive. "The software we developed could be equally useful in other areas of biology."

Cells dynamics over mitosis are full of surprises

The researchers observed a range of intracellular phenomena, studying them with an unprecedented degree of clarity. The team’s findings have even answered several enigmas in science.

For instance, cells change size considerably when they divide - a process known as mitosis. But inconsistent research findings meant that scientists were unsure whether the cells expanded or contracted. By observing cell division with the Nanolive microscope and processing the data with the purpose-designed computer vision strategy, the team was able demonstrate that, in fact, cells do both: expanding then quickly contracting again immediately prior to separation. "Our findings could lead to new label-free approaches to studying whole-cell dynamics," says Frechin.

Likewise, the researchers knew that organelles - the "organs" of a cell - were not static. Yet, with conventional microscopy techniques, scientists were unable to quantify or connect their relative movements. "We weren’t aware of any image-processing software suited to measure multiple rotating organelles in a coordinated way," adds Frechin. "Developing one posed a real challenge." Using the new technology and cross-disciplinary computer vision strategies, the team demonstrated that the entire cell nucleus rotates, not just the liquid inside it known as nucleoplasm. In addition, they posited that the entire intracellular compartment could be rotating, since the lipid droplets inside it move in a similar way. The researchers also measured rotation speed, acceleration and rotation time. Their discoveries could result in a better understanding of the phenomenon’s molecular origins, as well as the role it plays in cell physiology - especially in germ cell dormancy and other fundamental functions.

The research team also observed and quantified other phenomena, such as lipid droplet formation inside the intracellular compartment. These droplets bud off the endoplasmic reticulum (ER) by recycling material from older droplets. The flows of material could even be synchronized, suggesting membrane continuity between the droplets and the ER. Future research could shed further light on how lipid droplets interact, for instance by genetically or chemically disrupting the ER-droplet relationship. Armed with this new-found ability to peer deep inside cells, researchers are poised to unlock more of their hidden secrets. 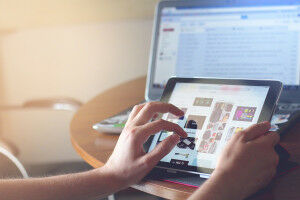