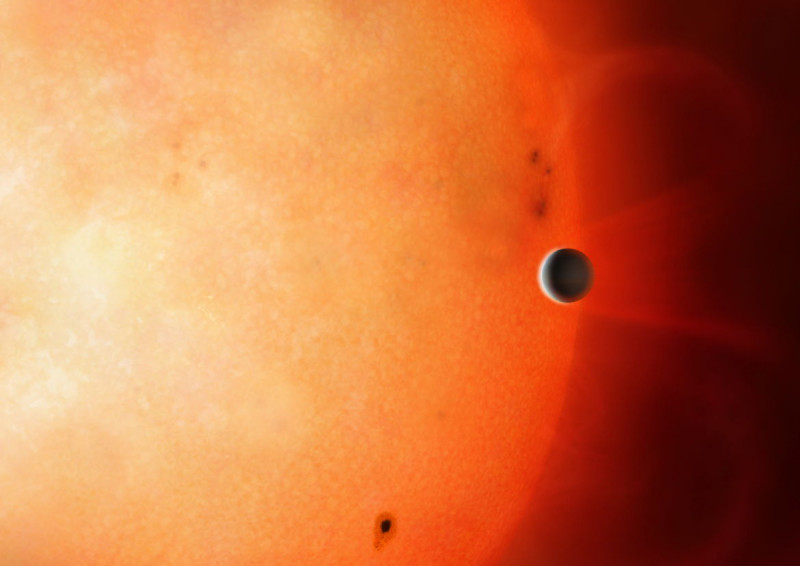 Artist’s impression showing a Neptune-sized planet in the Neptunian Desert. It is extremely rare to find an object of this size and density so close to its star. © University of Warwick/Mark Garlick

Researchers led by the University of Warwick have discovered the first exposed core of an exoplanet, which provides an unprecedented glimpse inside the interior of a planet. Christoph Mordasini from the University of Bern is leading the theoretical interpretation of this discovery.

The newly discovered exoplanet TOI 849 b offers the unique opportunity to peer inside the interior of a planet and learn about its composition. It orbits around a star about 730 light years away, which is very similar to our sun. The exposed core is the same size as Neptune in our solar system. The researchers assume that it is a gas giant that was either stripped of its gaseous atmosphere or that failed to fully form one in its early life due to special circumstances. The study by the team led by Dr David Armstrong from the University of Warwick’s Department of Physics is published today in the journal Nature. PD Dr. Christoph Mordasini from the University of Bern Physics Institute led the theoretical interpretation of the discovery.

A year that is a mere 18 hours

TOI 849 b is an extremely unusual planet in the so-called "Neptune Desert" - a term used by astronomers for a region close to stars where we rarely see planets of Neptune’s mass or larger. The lead author of the study, Dr. David Armstrong from the University of Warwick, says: "The planet is strangely close to its star, considering its mass. In other words, we don’t see planets with this mass at these short orbital periods." TOI 849 b orbits so close to its host star that a year is a mere 18 hours and its surface temperature is around 1,500 °C.

Christoph Mordasini explains: "We have determined the planet’s mass and radius. TOI-849b is about 40 times heavier than the earth, but its radius is just 3.4 earth radii." So the planet has a high density and therefore has to primarily consist of iron, rock and water, but only very little hydrogen and helium. "Such a small amount of hydrogen and helium is really astonishing for such a massive planet. We would expect a planet this massive to have accreted large quantities of hydrogen and helium when it formed."

David Armstrong adds: "The fact that we don’t see those gases lets us know TOI 849 b is an exposed planetary core." This is the first time that an intact exposed core of a gas giant has been discovered around a star.

The University of Bern has been continuously developing the "Bern Model of Planet Formation and Evolution" since 2003. Christoph Mordasini says: "In our model, we combine insights into the manifold processes involved in the formation and evolution of planets." Thanks to the world-renowned Bern model, discoveries such as those of the exoplanet TOI 849 b can be interpreted theoretically.

Based on the Bern model, two theories can be formulated which explain why TOI 849 b is not a typical gas giant but an exposed planetary core. "The first is that the exoplanet was once similar to Jupiter but lost nearly all of its outer gas through a variety of processes," Christoph Mordasini says. These could include tidal disruption, where the planet is ripped apart from orbiting too close to its star, or even a collision with another planet. Large-scale photoevaporation of the atmosphere could also play a role, but can’t account for all the gas that has been lost.

Alternatively, TOI 849 b could be a "failed" gas giant. "Once the core of the gas giant formed then something very unusual could have happened and it never formed a massive atmosphere as normally. This could have occurred if there was a gap in the disk of dust and gas that the planet formed from due to gravitational interaction with the planet, or if the disk ran out of material right at the very moment when gas accretion normally follows," Mordasini adds.

David Armstrong says: "Our discovery proves that planets like this exist and we can track them down. We have the opportunity to look at the core of a planet in a way that we can’t do in our own solar system."

How TOI 849 b was discovered and analyzed

TOI 849 b was found in a survey of stars by NASA’s Transiting Exoplanet Survey Satellite (TESS), using the transit method: the satellite measures the brightness of a star. A dip in brightness indicates that a planet has passed in front of them.

TOI 849 b was then analyzed using the HARPS instrument built under Swiss leadership, at the European Southern Observatory’s La Silla Observatory in Chile. This utilizes the Doppler effect to measure the mass of exoplanets by measuring their ‘wobble’ - small movements towards and away from us that register as tiny shifts in the star’s spectrum of light.

René Doyon: A scientific star with both feet firmly planted on the ground - 29.01

Related Stories
Environment
Could the lack of snow signal drought in 2023? - 31.01 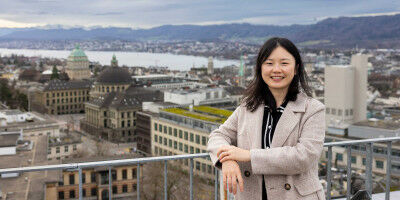