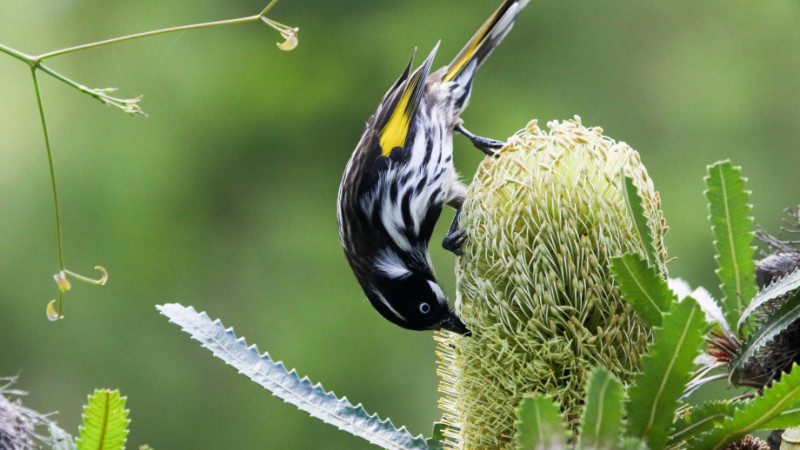 New Holland honeyeaters are experts at sounding the alarm when there’s danger, according to new research from biologists Jessica McLachlan and Rob Magrath. They found honeyeaters can spread the word in the blink of an eye, using a two-stage alarm. It’s particularly effective when they are threatened by fast-moving birds of prey.

"When a hawk is swooping down, its target has only a fraction of a second to flee to cover - a split second can make the difference between life and death," Jessica McLachlan (University of Cambridge) said. "But animals often signal urgent danger using repeated notes, which makes sure others hear the warning but it takes a long time to deliver.

"So there’s a problem. How to send a lightning-fast message in a long call?"

New Holland honeyeaters solve this problem elegantly. They ’front-load’ information about urgency into the first note of their alarm call, so other honeyeaters can respond quickly. The clever honeyeaters follow this up with more notes to reinforce the message and signal how long to remain hidden.

"They use a long call, with lots of notes, to make sure the message is heard," Rob Magrath (Australian National University) said. "And the more notes, the more urgent the danger.

"But they also modify the first note to indicate if it’s necessary to take immediate cover. So it’s a two-part message that is quick, reliable and informative."

The technique is so effective the authors expect to see other species adopt it.

"Many other species modify alarm calls as the threat increases, but there is surprisingly little known about how fast they convey the message," Professor Magrath said.

The researchers conducted their study in Canberra’s Australian National Botanic Gardens over a period of several years.

"These birds live in the Gardens and are used to having people around. This helped us to record natural interactions with their predators, such as sparrowhawks and currawongs, and to video the honeyeaters’ responses to different alarm calls," Professor Magrath said.

The research is published in the journal Proceedings of the Royal Society B.

7,000 years of demographic history in France - 25.05
Problems with alcohol? 29 gene variants may explain why - 25.05
Even natural products can be harmful for the unborn child - 25.05
This site uses cookies and analysis tools to improve the usability of the site. More information. |