Large mammals disappear from the Eifel region 11,000 years ago as a result of increasing forestation 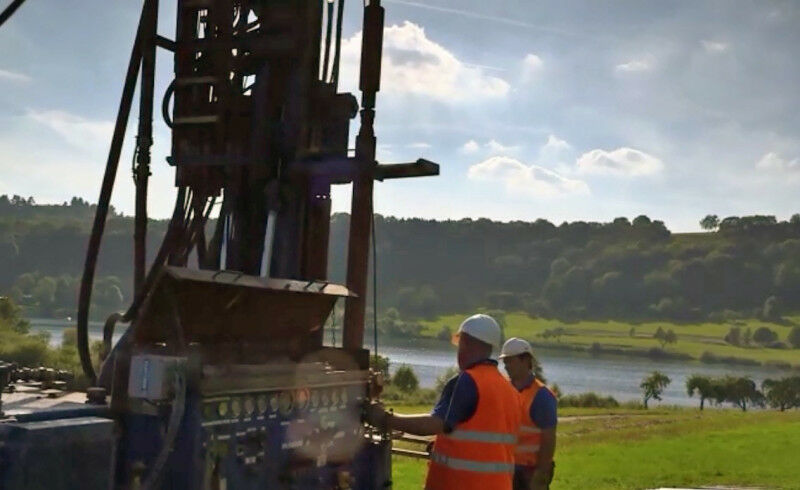 Drill rig in action: Sediment cores are obtained in a dry maar near Schalkenmehren as part of the ELSA project.

Sediment cores from Eifel maars provide information on the development of ice-age large mammals in Central Europe during the past 60,000 years / Overkill hypothesis not confirmed

For tens of thousands of years, herds of large mammals such as mammoth and bison roamed the landscape of what is now Central Europe. However, with increasing forestation at the end of the last ice age, populations declined and about 11,000 years ago the large mammals disappeared completely from this region. Forest development is thus the most important factor controlling the presence of large mammals in Central Europe. This is the conclusion of a study led by Frank Sirocko of Johannes Gutenberg University Mainz (JGU). With the participation of the Max Planck Institute for Chemistry, the University of Wollongong in Australia and the University of Göttingen, deposits from two Eifel maars were examined, providing information about developments over the last 60,000 years. According to the study, hunters and large mammals were present in parallel over several millennia. "We have found no evidence from the sediments from the Eifel maars that hunters wiped out the animals," Sirocko said. The overkill hypothesis discussed in North America is thus not confirmed.

For their study, the research partners used sediment cores from Eifel maars, which Sirocko and his team have systematically tapped and archived over the past 20 years. For the current publication in the journal Scientific Reports, deposits of pollen and spores from the Holzmaar lake and the dry maar of Auel in the volcanic Eifel were examined. Pollen documents the vegetation of the past, fungal spores provide evidence of the presence of large mammals, because certain molds only grow on the dung of large herbivores.

Based on the pollen grains, the researchers determined that the Eifel region was covered by a spruce forest from 60,000 to 48,000 years ago, which then collapsed in several cold spells and developed into an open forest steppe. This forest steppe shaped the landscape from 43,000 to 30,000 years ago. Subsequently, the Eifel developed over a forest tundra into a grass-covered ice-age polar steppe.

Large mammal fecal spores show that large mammals lived continuously in this Eifel landscape from 48,000 to about 11,000 years ago. Dated bone finds from caves in Belgium and from gravels of the Rhine valley document that mammoth, woolly rhinoceros, bison, horse, reindeer and giant deer preferred the cold phases. In the warm phases, red deer, elk and bison lived in sparse forests. 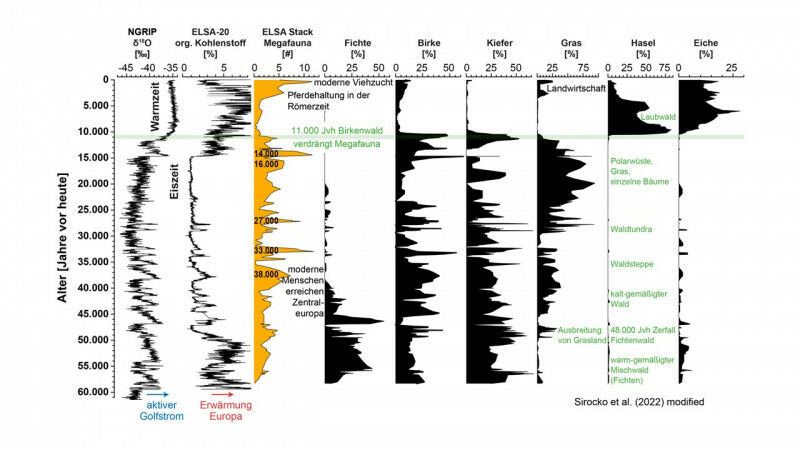 Climate evolution of the Greenland/North Atlantic/Central Europe region: large mammals were present throughout with greatest density about 15,000 years ago. When closed pine and birch forests developed 11,000 years ago, they left the region.

The main cause of the decline and eventual disappearance of large mammals in Central Europe was the development of forests. "With increasing forestation, the large herbivores probably lost their main food source, namely grass," Frank Sirocko explains the connections. Neither the strong climate changes of the last 60,000 years nor volcanism and associated fires seem to be linked to the extinction of the large mammals. The presence of these animals is also unlikely to have been affected by modern humans appearing in central Europe 43,000 years ago. Instead, periods of high occurrence of large mammals coincide several times with periods of high human presence. "We see this most clearly about 15,000 years ago. At that time, the highest abundance of large mammals coincided with the archaeologically documented presence of hunters in the Rhine Valley," Sirocko said. The Gönnersdorf site in northern Rhineland-Palatinate was intensively studied by the Roman-Germanic Central Museum - Leibniz Research Institute for Archaeology (RGZM) in Mainz.

Already in these millennia of the Late Ice Age, the authors observe a spread of grasslands. This period coincides with the rise in solar radiation in the northern hemisphere and the first rise in global sea level, which flooded the arid regions of the English Channel and the North Sea - presumably pushing herds of large mammals further into central Europe. "The many late-glacial Eifel maar lakes and silted-up swamps in the dried-up maars must have been a real draw for large mammals," Sirocko adds. "The late glacial hunters in the Rhine Valley were probably then attracted to these herds."

According to the research team, the fact that hunters and large mammals lived side by side for several millennia proves that these hunters did not exterminate the animals. Evidence for the overkill hypothesis discussed in North America is not shown by the Eifel maar sediments. The large mammals did not leave the landscape until birch forests became denser 13,300 years ago. Since about 11,000 years ago, large mammal herds are not represented at all, because since then dense forests covered the Eifel and large animals simply could not find a habitat in them.

The wondrous world beneath our feet - researching groundwater fauna - 27.01