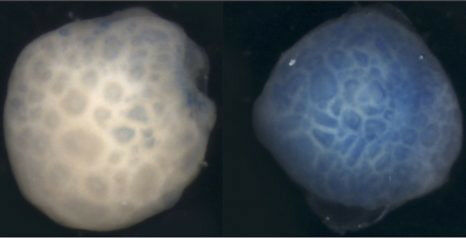 Valproic acid is a drug used to treat epilepsy, bipolar disorder and other psychiatric illnesses. While use of this drug by pregnant women has been associated with developmental and cognitive problems in children exposed during pregnancy, the mechanisms by which it causes these problems remain poorly understood. In a new study, researchers from Inserm, CNRS and the University of Strasbourg at the Institute of Genetics and Molecular and Cellular Biologycular and Cellular Biology (IGBMC) conducted experiments on human brain organoids and in animal models to gain insight. Their results suggest that valproic acid induces excessive cellular senescence [1] in embryonic brain stem cells, and that this partly explains some of the defects in neural development as well as some of the problems associated with the use of the drug.development and some physiological features of drug exposure, such as microcephaly. This research is published in the journal Plos Biology .

Valproic acid (VPA) is a widely prescribed medication for epilepsy, bipolar disorder, migraine and other conditions. However, this treatment is teratogenic if taken during pregnancy: expectant mothers are at a significantly increased risk of giving birth to children with certain developmental defects (neurodevelopmental disorders, cognitive impairments or even birth defects). In 2018, the European Medicines Agency recommended that valproic acid no longer be prescribed to pregnant women.

However, it is estimated that currently in France, between 17,000 and 30,000 children suffer from some level of cognitive impairment or autism spectrum disorder (ASD) as a result of in utero exposure to this drug. In addition to these disorders, some exposed babies also develop congenital malformations, such as microcephaly [2] or spina bifida [3]. Between 2,000 and 4,000 children would be affected by this type of problem.

While these data are well known and confirmed by numerous studies, the underlying mechanisms that explain the impact of valproic acid on development are still poorly documented. It appears necessary to study how VPA causes these abnormalities at the cellular and molecular level.

Senescence in the brain

Inserm researcher Bill Keyes and his team at the IGBMC (Inserm/CNRS/University of Strasbourg) have discovered that valproic acid activates a process of cellular senescence that leads to an arrest in the development of brain cells at the embryonic stage. Often a response to aging, or age-related diseases, senescence is the irreversible arrest of the cell cycle, which results in cell death.

To reach these results, the scientists first studied mouse embryos exposed to valproic acid. They identified a strong senescence in the neuroepithelial cells, the embryonic precursors of the brain, which results in a decrease in the number of neurons, causing an alteration in brain development.

Next, they observed similar results in human neuroepithelial cells through the use of organoids, structures used to simulate human brain development.

Bill Keyes and his team have been studying senescence for several years. This biological process is usually associated with aging and age-related diseases. However, the team’s research showed 10 years ago that senescence could in some cases affect certain cells during embryonic development, with beneficial effects.

The scientists’ hypothesis is that senescence, initiated at the wrong time in development, may instead be associated with cognitive or neural developmental disorders. Their study on valproic acid was conducted in this context, while their work in the laboratory aims to better understand the links between development and senescence.

To go further and better understand how this deleterious senescence process takes place, the scientists conducted genetic studies on mice and thus showed the involvement of a protein called p19Arf.

We show that valproic acid causes excessive senescence in the brain. These results provide a better understanding of one of the ways in which valproic acid acts on the nervous system during embryonic development and causes some of the defects that can be observed in exposed babies. However, further studies will be needed to identify other mechanisms involved," said Bill Keyes, an Inserm researcher and the study’s last author.

The team now wants to continue studying senescence in other models to understand the role of this process in other developmental disorders. The finding that atypical activation of senescence in the embryo can disrupt development raises the possibility that it may also contribute to defects in developmental contexts beyond those we have studied here, concludes Muriel Rhinn, first author of the study and CNRS researcher.

[1] Senescence is the irreversible arrest of the cell cycle, which results in cell death.

[2] A congenital malformation where the baby’s head is smaller than those of babies of the same sex and age.

[3] An abnormality of the neural tube closure that should have taken place normally between the 21st and 28th day of pregnancy.

Vital tech with a fatal flaw - 08.08
This site uses cookies and analysis tools to improve the usability of the site. More information. |