« Previous 1 2 3 4 5 6 7 ... 16 Next »
Pharmacology - Health - 22.11.2022
Performance-enhancing pill
Increasing numbers of young people reportedly make regular use of low doses of LSD or other illegal substances to improve their cognition. Disquiet among parents and educational institutions is growing. Nadia Hutten investigated this phenomenon during her PhD, supervised by Professor Jan Ramaekers. How dangerous is this type of 'microdosing'- And does it actually enhance students' performance? No, Hutten has never used drugs to improve her own mood or cognition.
Pharmacology - Health - 22.11.2022

New study brings personalised immunotherapy prescriptions a step closer
Research validates an imaging platform co-developed at CTI-Bath which predicts if a cancer patient would respond well to immunotherapy. In a step likely to advance personalised cancer treatment, scientists have for the first time shown in patients that levels of biomarkers are not enough to tell which patients are likely to respond best to immunotherapy.
Health - Pharmacology - 18.11.2022
PETN reduces risk of preterm birth and hypertension in pregnancy
In about one in twenty pregnant women, ultrasound Doppler measurement in mid-pregnancy reveals that the uterus and placenta are not sufficiently supplied with blood. There is then a risk that the baby will not be adequately supplied by the mother's body and will not develop in time. In the worst case, the baby may die in the womb before birth.
Pharmacology - Health - 18.11.2022
Improving antimicrobial stewardship: RVC research reveals extent of systemic antimicrobial usage in UK equine practice
To mark World Antimicrobial Awareness Week, the Royal Veterinary College (RVC) has released new research using real-world antimicrobial prescription data to investigate the use of systemic antimicrobials in UK equine practice. The research, which is the first of its kind, reveals the extent to which antimicrobials are prescribed to equids and uncovers the lack of routine culture and sensitivity testing, particularly prior to the prescription of the 'last resort' Category B antimicrobials, whose efficacy needs to be preserved for the treatment of serious illnesses in human medicine.
Health - Pharmacology - 17.11.2022
Obesity: research focuses on treatments for secondary diseases
As the number of obese people suffering from related conditions such as liver disease increases, so does the need for research to develop interventions to improve patient care. The Christian Doppler Laboratory, which opened today at MedUni Vienna, is investigating the physiological basis of the consequences of obesity.
Health - Pharmacology - 17.11.2022
Machine learning can help predict patient response to cancer immunotherapy
Predicting which patients will respond well to treatment is a quandary that has plagued the field of cancer immunotherapy for more than four decades. Now, researchers at the Johns Hopkins Kimmel Comprehensive Cancer Center and its Bloomberg~Kimmel Institute for Cancer Immunotherapy are one step closer to solving that problem.
Health - Pharmacology - 16.11.2022
Full vaccination more effective than boosters in preventing the spread of Covid
A small increase in the number of people having two vaccines against Covid-19 was more effective in controlling the virus during Europe's fourth wave - when the Omicron variant appeared - than the rapid uptake of booster vaccines, finds a new UCL-led study. Published in the International Journal of Public Health , the study found that a 4.2% increase in the number of people having two doses (full vaccination) led to a 54% reduction in case rates across Europe - despite the detection of the highly infectious Omicron.
Pharmacology - Chemistry - 16.11.2022

Urine reveals our eating habits
We already know that a urine test can establish whether someone has an infection of the urinary tract or has taken illegal drugs. But there are lots more traces to be found in urine - if you know how to read them. Developing and refining techniques to get pointers to a person's eating habits or to harmful substances in their urine is one of the pet projects being pursued by food chemist Prof. Hans-Ulrich Humpf and his working group at the University of Münster.
Health - Pharmacology - 16.11.2022
How an Emerging Drug Class Dampens Harmful Immune Reactions
Although the complement system forms part of the innate immune system, it can cause damage to the body in some cases. This is because unwanted complement activation contributes to many autoimmune and chronic inflammatory diseases. Now, researchers have described molecular details of a recently approved class of drugs that can inhibit the complement system.
Health - Pharmacology - 16.11.2022
Preventing European cancer epidemic
Europe will face a cancer epidemic in the next decade if weaknesses in cancer health systems and cancer research are not urgently addressed, say the authors of a major new report. The large-scale collaborative research project, in which the University is a key participant, warns that prioritising cancer research is crucial for European countries to deliver more affordable, higher quality, and more equitable cancer care.
Pharmacology - Health - 15.11.2022

Potential new lead compounds for the treatment of depression and anxiety disorders
Currently, various classes of drugs are available for the treatment of mental illnesses - such as depression and anxiety disorders. However, although these drugs confer benefits, they are also associated with adverse side-effects. Conseqeuntly, medical researchers continuously thrive to improve the pharmacological properties of therapeutic agents to optimize the benefit-to-side-effect ratio.
Health - Pharmacology - 15.11.2022 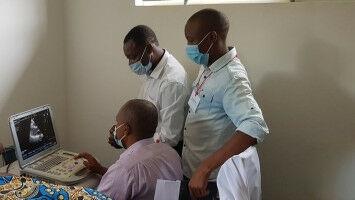 Improving Diagnosis for Extrapulmonary Tuberculosis
Tuberculosis (TB) remains one of the world's biggest infectious disease killers. It is a complicated disease to diagnose and treat, even more so when it affects organs outside of the lung. A clinical trial in Tanzania tested a diagnostic algorithm including point-of-care ultrasound to increase the proportion of correctly managed patients.
Health - Pharmacology - 14.11.2022

Attack via byways
Increased cell proliferation is a key feature of diseases such as cancer. A research team from the University of Würzburg and two Leibniz Institutes has now succeeded in indirectly influencing this process. As differently as cancers or autoimmune diseases such as multiple sclerosis, rheumatoid arthritis or psoriasis affect people - they all have one characteristic in common: they are accompanied by increased cell proliferation.
Health - Pharmacology - 10.11.2022

Ingestible sensor could help people with HIV stick to medication regimen, UCLA-led study finds
For people living with HIV, sticking to a prescribed medication regimen is a critical part of staying healthy. However, having to deal with the side effects caused by those medications —nausea and dizziness among them — can lead people to skip doses. Now, a UCLA-led study of 130 people with HIV suggests that a tiny piece of technology could play a big role in encouraging people to take their medicine on time.
Health - Pharmacology - 09.11.2022

A new nanoparticle to act at the heart of cells
A team from the University of Geneva and LMU developed a transport nanoparticle to make an anti-inflammatory drug much more effective and less toxic. How can a drug be delivered exactly where it is needed, while limiting the risk of side effects? The use of nanoparticles to encapsulate a drug to protect it and the body until it reaches its point of action is being increasingly studied.
Health - Pharmacology - 09.11.2022

Long COVID: A Dysregulated Immune Response Could Explain Symptoms Persistence
Several months after SARS-CoV-2 infection, some patients continue to have symptoms. This phenomenon, known as "post-COVID condition” or, more commonly, "long COVID”, remains poorly documented. In order to address this and improve patient care, research teams are trying to improve their understanding of the underlying biological and immunological mechanisms.
Health - Pharmacology - 07.11.2022

ANU and Korean firm set sights on finding cure for blindness
Korean biotech company MDimune Inc. and scientists from the Clear Vision Research Lab at The Australian National University (ANU) will join forces to develop new and more effective treatments for age-related macular degeneration (AMD) - the leading cause of blindness in the developed world and affecting one-in-seven people over the age of 50.
« Previous 1 2 3 4 5 6 7 ... 16 Next »