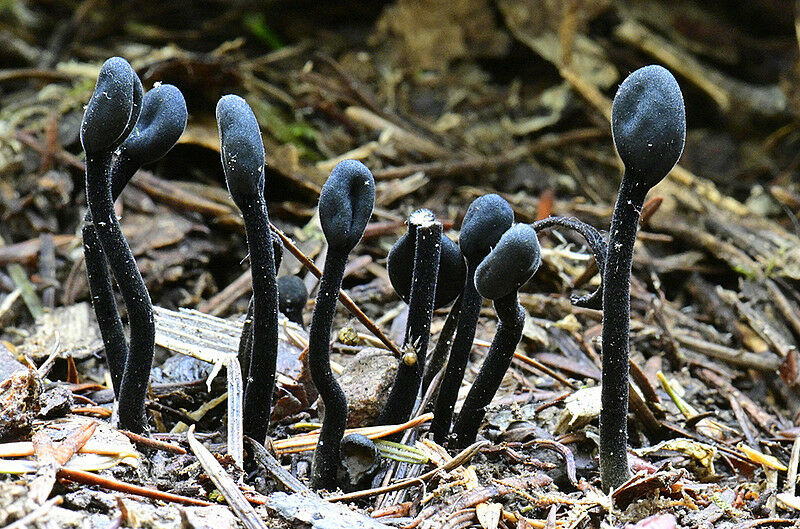 Trichoglossum velutipes, a species of the genus Hairy Tongue in California. They are one of those ,,weird’ fungi that are regrouped. Photo: Alan Rockefeller

You can’t choose kinship. This also applies to a special group of fungi that could not be more different: Whether they grow in native forests, live in the guts of insects or are found in trees in the Amazon. Until now, they were not considered to be related to each other because of their different appearance and their dissimilar life strategies. Yet they have common ancestors, as an international team of scientists from the University of Graz has discovered. They have discovered a great similarity in the genetic information of these fungi and are now rewriting their "family history".

,,Weird" Fungi
Not even at second glance do they have much in common: slimy earth tongues in moss, tiny creatures in the intestines of the bread beetle, or parts of lichens in the desert and on tree trunks. The new study now shows that the genetic material of these "weird" fungi has a lot in common and that they have the same origin, which dates back about 300 million years. Since then, they have continued to evolve, spread across the globe, and formed different characteristics as well as forms.

Six becomes one
Philipp Resl from the Institute of Biology at the University of Graz, in collaboration with colleagues from the University of Alberta (Canada), has demonstrated the close biological relationship. To do this, they compared the entire DNA, i.e. several genomes of many fungi. In the end, six became one. These fungi, long regarded as oddities, were once divided into six different classes, which can now be combined into one large class on the basis of our new findings," explains Resl. A class is a high-ranking grouping in the tree of life, which in animals would correspond to mammals or reptiles, for example.
It’s a bit like platypuses," compares Toby Spribille of the University of Alberta, who is leading the research project together with Resl. The exotic creature lays eggs and looks like a cross between a mammal and a bird. In reference to this, the scientists call the new group "platypuses of the fungal world".
Among other things, the biologists expect to gain insights into how fungi inherit enzymes that break down plant material. Philipp Resl is convinced: At the University of Graz, we are conducting intensive research into the genomics of various organisms, which will lead to further exciting discoveries.

The findings were published Nov. 23, 2022, in the journal Current Biology.

If you want to immerse yourself even more intensively in the world of mushrooms, you can study biology at the University of Graz.