The ’Engineering Humanitarian Action’ initiative aims to put the expertise of the two federal institutes of technology at the service of humanitarian action. (Photograph: ICRC)

Using innovative technologies and scientific expertise to help people in need is the goal of the Engineering for Humanitarian Action initiative launched by the ICRC, ETH Zurich and EPFL in 2020. Six of the projects are already offering results for tangible improvements for the ICRC.

The assessment tool was presented this year to the World Urban Forum in Poland. In the Global Shelter Cluster in Geneva, many representatives from various humanitarian organisations such as UNOPS, UNHABITAT, NRC, UNHCR, Interaction and more have also expressed their interest.

Knowing how many people are living in an area affected by conflict helps the ICRC plan humanitarian measures more effectively, but this information is often difficult or impossible to obtain. ETH Zurich Professor Konrad Schindler and his EPFL colleague Devis Tuia are tackling this problem with data derived from satellite images that lets them describe an area in as much geographic detail as possible.

Information such as the number and size of buildings, the density of the road network and the ratio of woodland to built-up areas is fed into a self-learning neural network. "Building on publicly accessible geospatial data, we’re able to use artificial intelligence to estimate and map the population density of a given area," Schindler says. "Based on the geographic context, the AI learns to draw conclusions about how the settlements are structured. For instance, it knows that buildings in city centres are taller than those on the outskirts. This allows for a finer granularity of population density."

The researchers have already tested a prototype of their algorithm using data from several countries in Africa, including Tanzania, Uganda and Rwanda - all countries in which the ICRC is also active. They have produced a series of digital maps showing estimations of population per hectare. The team expects to deliver the software to the ICRC soon. "This partnership allows us to have access to state-of-the art technology that the ICRC doesn’t necessarily have the time (nor skills) to explore," says ICRC’s Thao Ton That Whelan.

Supplying medical products in conflict zones is challenging, with frequent bottlenecks and problems distributing essential goods. To improve logistics and thus enhance the quality of medical care during humanitarian crises, the ICRC has been collaborating with ETH Zurich Professor Stephan Wagner and Bublu Thakur-Weigold from ETH’s Chair of Logistics Management for the past two years.

Wagner and Thakur-Weigold have evaluated supply chains between an ICRC medical facility in Juba, South Sudan, and the organisation’s logistics headquarters in Geneva. They found that supply problems were being caused by an overly centralised planning system. Too many of the 270 medical products are still being ordered and distributed from Geneva. "But when it comes to frequently used consumer goods like bandages or certain medicines, it’s more effective to procure and distribute these goods locally," Wagner says.

"Working with the ETH team has allowed us to scientifically check some ideas we had about the main supply chain issues and find ways to solve them," says Ruben Naval Artal from the ICRC.

In the future, the ICRC will have access to an analysis tool developed by ETH Zurich researcher Thakur-Weigold, which will improve decisions such as how much of each article to keep on hand at each location. Hospitals and aid stations in crisis areas can be supplied with lifesaving products more reliably and cost-effectively. 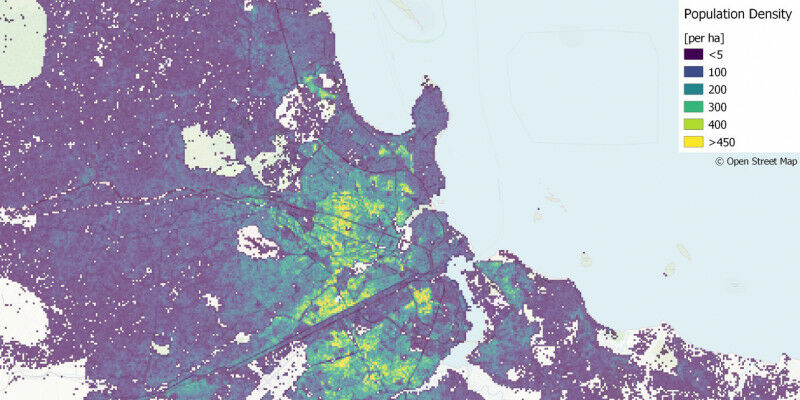 The map shows the estimated population density in Dar es Salaam, the largest city in Tanzania.

Humanitarian organisations must efficiently deliver aid while ensuring that they are fair in providing a service to those that need it. In humanitarian emergencies, determining the identities of aid recipients is a challenging task, in part simply because many of the people affected don’t have or perhaps never had identification documents.

The use of biometrics - physical characteristics such as fingerprints or iris scans - can alleviate this problem, but it raises important privacy concerns, including the potential to expose beneficiaries’ personal data. The EPFL Spring Lab’s Professor Carmela Troncoso and Postdoctoral Fellow Wouter Lueks have developed a biometric system that protects personal information and is suitable for deployment in humanitarian settings.

The privacy improvements rest on two key insights. Firstly, the system is decentralised and users can keep their biometric data on tokens or other devices, mitigating the risk of data leaks and protecting user rights. Secondly, accountability can be ensured without large-scale data collection. "Only the total transaction and the number of families requesting aid are used," says Lueks. "We use cryptography to hide individual transaction details while preserving accountability details."

’Working with the ETH Zurich team has allowed us to scientifically check some ideas we had about the main supply chain issues and find ways to solve them.’

"This work is critical to us because leaked data in the wrong hands can be used for harmful purposes and even put people’s lives in danger," says ICRC project partner Vincent Graf Narbel.

In January this year, the ICRC was the victim of a sophisticated cyberattack. The attack compromised personal data and confidential information of more than 515,000 highly vulnerable people, including missing persons, people in detention and those separated from their families due to conflict, migration and disaster. The incident shows that in cyberspace, the ICRC and other humanitarian organisations must secure their infrastructure to protect vulnerable people against the most powerful adversaries.

A secure cloud architecture is one element needed to protect against unauthorised access and guarantees integrity and availability of the data. To offer better protection against cyberattacks, three ETH Zurich professors - Luca Benini, Srdjan Capkun and Adrian Perrig - have teamed up to develop a new digital infrastructure to fit the ICRC’s needs and capacity. In addition to a customised network that safeguards metadata, it features the SCION technology developed at ETH Zurich and complete cloud architecture that is more resilient against cyberattacks. The infrastructure will also be protected by processors developed by ETH.

In the future, the ICRC and other humanitarian organisations can leverage this new architecture to confidentially communicate data more securely, both internally and with affected populations. "The objective of this project is well aligned with our ambition to work towards more security and independence in the digital sphere," says ICRC’s Vincent Graf Narbel.

Disinformation and hateful rhetoric are common tools used to fuel ethnic and religious tensions and incite violence - including against humanitarian organisations. In 2018, aid workers from the ICRC combatting Ebola found themselves to be victims of disinformation campaigns, which led to violence. EPFL Professor Karl Aberer of the Distributed Information Systems Laboratory and his team are developing technical methods to monitor and combat misinformation directed against humanitarian organisations on social media.

"Preventing disinformation attacks against humanitarian organisations and their workers is important to the ICRC, to ensure we can reach out to the persons in need and deliver aid," says Fabrice Lauper of the ICRC.

Using immune cells to develop new active substances and improve the efficacy and safety of drugs - 08.12
Related Stories
Innovation
’No other technology has changed humanity and the world as quickly and intensely as web- and data-driven intelligent systems (AI)’ - 08.12
Continuing education, over the years and across borders  - 08.12
This site uses cookies and analysis tools to improve the usability of the site. More information. |