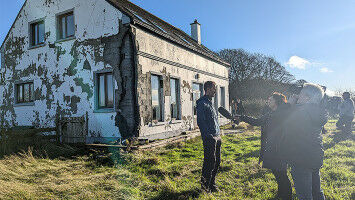 Brittle concrete walls: researchers find the cause
After extensive analyses, researchers found the cause of the concrete scandal in County Donegal, Ireland, where structural damage has been causing red faces and protests for years: Concrete walls of thousands of houses are riddled with cracks, necessitating expensive repairs or even demolition. For the longest time, an excessively high mica content in the concrete was thought to be the reason.
Environment - Civil Engineering - 17.05.2022
Autonomous water purification
To be more sustainable, the construction industry needs reliable service-life predictions for structures. Ueli Angst calls for a paradigm shift in forecasting the durability of reinforced concrete. The construction industry is experiencing a revolution, with digitisation, decarbonisation and robotics-assisted fabrication all having a lasting impact on practice and research.
Civil Engineering - Environment - 02.07.2021

Better planning can reduce the urban heat island effect
In his PhD thesis, EPFL researcher Martí Bosch proposes a method for spatially quantifying the impact of mitigation measures - planting green spaces and using different building materials - on the urban heat island effect. During hot weather, cities are warmer than the surrounding rural areas. This well-known phenomenon - known as the urban heat island effect - is particularly acute at night when concrete and asphalt release the heat stored up during the day.
Civil Engineering - 12.10.2020
Newest housing least comfortable during lockdown
People living in housing built in the last 10 years were more likely to report feeling uncomfortable in their home during lockdown, while those in pre-1919 developments were most likely to be comfortable, according to a new report led by UCL researchers. The research team surveyed 2,500 households across the UK to find out how the design of their homes and neighbourhoods affected their experience of lockdown.
Civil Engineering - Chemistry - 26.06.2020

TU Graz researchers want to fundamentally improve concrete diagnostics
Under the scientific direction of Graz University of Technology, an Austrian consortium is working on new investigation methods for rapid and precise assessments of concrete structures. Additional at the end of the text Whether crumbling tunnel walls, cracks in concrete facades or porous bridge piers, according to statistics from the National Association of Corrosion Engineers (NACE), damage to concrete structures caused by various environmental influences accounts for several billion euros worldwide every year.
Civil Engineering - 27.02.2020

The Unfoldable Bridge
A world premiere in Austria: The new bridge construction technology which was developed at TU Wien has now been successfully applied by ASFINAG during the construction of the Fürstenfeld Motorway There are many different methods for erecting bridges - but the new technique developed by TU Wien, the balanced lowering method, is quite spectacular: the bridge is not built horizontally, as would normally be case, but erected in a vertical position and then rotated into the horizontal position.
Civil Engineering - Social Sciences - 14.01.2020
Street network patterns reveal worrying worldwide trend towards urban sprawl
Channels McGill University News and Events New research from McGill University and the University of California, Santa Cruz has found that the local streets of the world's cities are becoming less connected, a global trend that is driving urban sprawl and discouraging the use of public transportation.
Environment - Civil Engineering - 03.07.2019

AI-designed heat pumps consume less energy
Researchers at EPFL have developed a method that uses artificial intelligence to design next-generation heat-pump compressors. Their method can cut the pumps' power requirement by around 25%. In Switzerland, 50-60% of new homes are equipped with heat pumps. These systems draw in thermal energy from the surrounding environment - such as from the ground, air, or a nearby lake or river - and turn it into heat for buildings.
Environment - Civil Engineering - 19.03.2019
What is on the ground in a city linked inequality in life satisfaction
Cities which have a balance between facilities, housing and natural green spaces have lower levels of socio-economic inequality in the life satisfaction of its residents, according to new research. ‌ In a European-wide study, led by the University of Glasgow MRC/CSO Social & Public Health Sciences Unit and published today in Social Science & Medicine, scientists found links between urban design and levels of inequality in life satisfaction.
Civil Engineering - 07.09.2018
Green urban space may be good for children’s brains
Children living in greener urban neighbourhoods may have better spatial working memory, according to new research by UCL Institute of Education (IOE). Spatial working memory is a measure of how effective people are at orientation and recording information about their environment. It enables us to navigate through a city or remember the position of objects and is strongly inter-related with attentional control.
Civil Engineering - 03.09.2018

A thinner bridge with enormous strength
The first railroad bridge in Germany made of ultra-high performance concrete (UHPC) has gone into operation on Bavaria's Tegernsee-Bahn railroad route near Gmund. The innovative high-performance concrete made it possible to build a particularly thin bridge. Engineers from the Technical University of Munich (TUM) planned the project and provided scientific supervision.
Civil Engineering - 30.07.2018

Bending The Rules
Steel bridges cost a lot of money to build. It's been estimated that the new motorway viaduct near Oberthulba in Bavaria will cost around 85 million Euros. Planners know that in order to save on material costs, build components should be designed with as much openwork as possible, whilst maintaining stability.
Health - Civil Engineering - 04.04.2018
Household air pollution linked to cardiovascular disease risk
Exposure to household air pollution from using wood or coal for cooking and heating is associated with higher risk of death from heart attack and stroke, according to new research published in the Journal of the American Medical Association (JAMA). Around three billion people worldwide use solid fuels (e.g.
Civil Engineering - 26.02.2018

Older bridges: Pushing the envelope
Research news In the summer of 2017, researchers from the Technical University of Munich (TUM) pushed the old Saale bridge in Hammelburg in Franconia to its limits: They carried out a total of five load tests - resulting in nasty cracks. In combination with laboratory tests, they hope to determine whether older bridges have greater load reserves than previously assumed.
Physics - Civil Engineering - 22.02.2018
Urban heat island effects depend on a city’s layout
The arrangement of a city's streets and buildings plays a crucial role in the local urban heat island effect, which causes cities to be hotter than their surroundings, researchers have found. The new finding could provide city planners and officials with new ways to influence those effects. Some cities, such as New York and Chicago, are laid out on a precise grid, like the atoms in a crystal, while others such as Boston or London are arranged more chaotically, like the disordered atoms in a liquid or glass.
Civil Engineering - 19.02.2018

The bridge that stretches
Bridges change shape, which is why they are usually built with expansion joints. At TU Wien, a technology has been developed that makes it possible to forego these joints, thus saving time and money. You can feel it straight away when you drive over a bridge quickly: the expansion joint that you rumble over at the start and end of the bridge.
Civil Engineering - 12.02.2018

Improving urban flood prediction
Heavy rainfall can cause flash floods in urban areas. While data from flood events is required to model such phenomena, water levels and discharges are not routinely measured above ground. Eawag now plans to make use of widely available images and videos to estimate these values. We are all familiar with the chaotic scenes caused by torrential rain in towns - roads turned into raging rivers and sewers overflowing, unable to cope with the volume of water running off streets, squares and rooftops.
Social Sciences - Civil Engineering - 17.01.2018
Location plays critical role in assimilation of U.S. immigrants
Research from the University of Chicago finds immigrant populations within the United States assimilate in different ways, with demographics and geography playing critical roles, according to a study by Angela S. García, a sociologist and assistant professor at the University of Chicago School of Social Service Administration.
Psychology - Civil Engineering - 10.01.2018
Study suggests exposure to trees, the sky and birdsong in cities beneficial for mental wellbeing
Researchers at King's College London, landscape architects J & L Gibbons and art foundation Nomad Projects have used smartphone-based technology to assess the relationship between nature in cities and momentary mental wellbeing in real time. They found that (i) being outdoors, seeing trees, hearing birdsong, seeing the sky, and feeling in contact with nature were associated with higher levels of mental wellbeing, and that (ii) the beneficial effects of nature were especially evident in those individuals with greater levels of impulsivity who are at greater risk of mental health issues.
Environment - Civil Engineering - 20.12.2017

Installing rooftop vegetable gardens for sustainable cities
From producing food to regulating water runoff, urban agriculture has a lot to offer. Scientists from INRA and AgroParisTech have shown that rooftop vegetable gardens are an interesting way to recycle urban waste, produce food, and retain rainwater. Their The challenges of making today's cities more sustainable are legion: waste management, food supplies, sensitivity to heatwaves and the risk of flooding linked notably to the impermeabilisation of soils.
1 2 3 4 5 Next »

recruit.myScience
f
Share
Like
wire.myScience
Materials Science - Jan 27
Graphenano and the University of Valencia make an impact in the battery sector by developing the first cell made without metals
Social Sciences - Jan 27

More short news
This site uses cookies and analysis tools to improve the usability of the site. More information. |