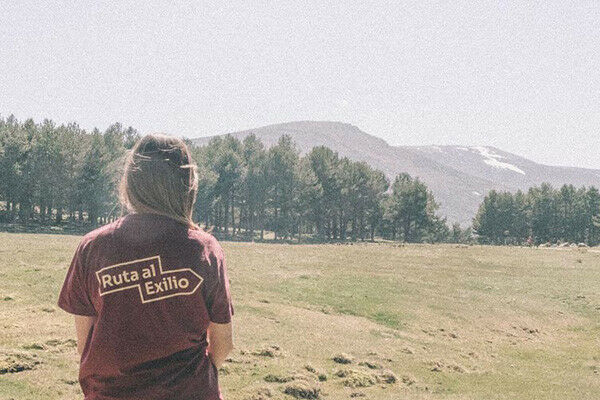 INJUVE and EUROM coordinate the first edition of Route of the Exile, to take place from July 15 to 30, and it is aimed at young people aged between 16 and 17.

The registration for the first Route of the Exile is open until June 4. This educational project is promoted by the Institute of Youth ( INJUVE ), affiliated body at the Ministry of Social Rights and 2030 Agenda, and the European Observatory on Memories ( EUROM ) from the Solidarity Foundation of the University of Barcelona. The initiative aims to bring the new generations closer to the history of the Spanish republican exile, through the memory places, and to do so using an interactive methodology that includes training and social and cultural activities.

The first edition will explore, from July 15 to 30, the Pyrenees frontier and the Mediterranean coast between Catalonia and France. This call is aimed at young people from all over Spain, aged between 16 and 17 during the moment of the expedition. The activity is free, since the 30 places will be covered by the Spanish Ministry of Social Rights and Agenda 2030 through INJUVE.

The exile, memory and national identities are the three basic ideas of the academic program of the opening expedition, which is titled "Ruta al Exilio 2021: un millar de huellas". The themes will be treated through workshops related to archaeology, environment, photography, theatre and other multidisciplinary proposals including the group interests of the participants.

Heir of other awareness experiences, Route to the Exile presents as an itinerary room to share with new generations the plurality of memories related to this episode of recent history in Spain. Understanding education as a tool to promote democratic values, the project aims to expand the understanding of the historical memory in classrooms and high schools. Last, Route to the Exile is presented as a meeting point for young people in Spain. After a year marked by the COVID-19 pandemic, the experience is a chance to recover personal interaction spaces and contact with the nature.

According to the general manager of INJUVE, María Teresa Pérez, "we are at a moment when intolerant and hate speeches are emerging again, and we need education more than ever so that young people know that fascism and anti-fascism are not the same and that chauvinist and racist proclamations are not respectable opinions".

According to the director of EUROM, Jordi Guixé, "it is essential to take the European train when it comes to democratic memory values, and the transmission of such memory and civic sense is necessary for young people". "Pedagogy -he adds-, education and knowledge on these places of memory will add richness and experience to the training of new generations. A project that has to grow and consolidate as a guarantee of more free and fair societies".

recruit.myScience
f
Share
Like
Related Stories
History / Archeology
Scottish and Irish researchers to investigate ancient Ogham script - 04.08
Remains of U.S. Pilot Recovered offshore Vietnam - 02.08
The analysis of one of the oldest paintings in the world confirms its human origins - 02.08
Noel Swerdlow, one of the ’greatest scholars’ of the history of science, 1941-2021 - 01.08
This site uses cookies and analysis tools to improve the usability of the site. More information. |