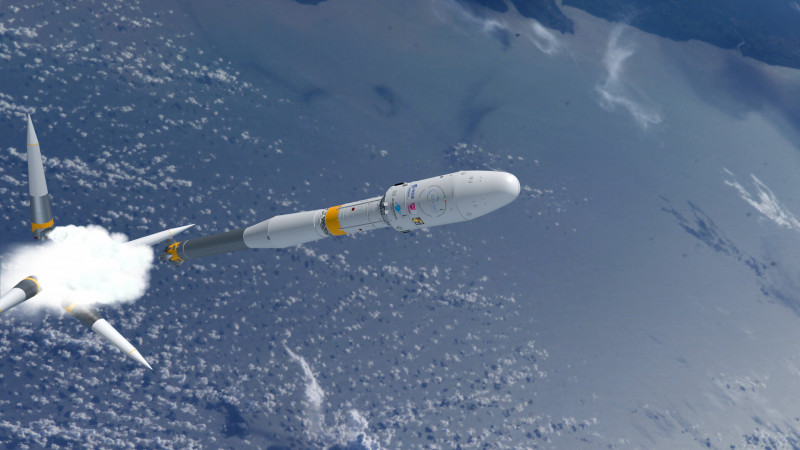 Artist’s impression of the launch of ESA’s Cheops mission, shortly after separation of the four boosters. (Source: ESA)

Following the successful launch of CHEOPS, and once routine tests of the satellite in orbit have been completed, operations are set to begin at the end of March 2020 and last around four years. The scientific community the world over is eagerly awaiting the data gathered on exoplanets, underlining the major importance of the contribution made by Swiss scientists.

CHEOPS (CHaracterising ExOPlanet Satellite) is a space telescope mounted on a satellite platform. It was engineered and assembled by the University of Bern in close cooperation with the University of Geneva. This is the first mission led jointly by Switzerland and ESA. During its study of known exoplanets, the mission will focus on planets in the super-Earth to Neptune size range orbiting host stars. The aim is to measure their size and estimate their composition (rocky or gassy) and certain atmospheric properties, which will be crucial in determining whether the exoplanets could potentially be habitable.

CHEOPS is ESA’s first ’small’ mission, in terms of budget and schedule in the frame of its scientific programme. It has provided Swiss scientists with the opportunity to showcase their technical expertise and leadership. The University of Bern, heads an international consortium composed of more than 100 researchers from 11 ESA member states, and has worked to complete the project within the budget and deadline. This is the first time that the Science Operations Centre of an ESA mission will not be based at ESA; instead it will be based at the University of Geneva, which is where observations will be planned, scientific operations managed and data analysed.

Fifty years after the first moon landing, when a scientific instrument from the University of Bern was placed on the surface of the moon, a space telescope assembled, tested and calibrated at the same university now orbits the Earth at an altitude of 700 km. In the meantime, the University of Bern has participated in more than 25 space missions. Over 80 companies and research institutions are contributing their know-how to space projects and stimulating innovation in Switzerland. The University of Geneva is a pioneer and major centre for research on exoplanets. The Nobel Prize awarded to two Swiss scientists from the university last week for discovering the first exoplanet in 1995 is a powerful symbol, placing Switzerland at the heart of research in astronomy.