Switzerland aims to become climate-neutral by 2050 - in other words, to stop emitting greenhouse gases (GHGs). Many strategies on this path to "net zero" involve replacing fossil fuels with electricity - in mobility in the form of electric vehicles and in buildings in the form of heat pumps. In Switzerland, most of the electricity required today comes from nuclear and hydroelectric power plants - technologies with a low carbon footprint. But if you look at Europe as a whole, the situation looks quite different: According to estimates, fossil-fuel power plants for electricity generation are responsible for around 25% of total European GHG emissions.

Even today, Switzerland is dependent on electricity imports from neighboring countries. The share of imported electricity is currently around 11%. While domestically produced electricity causes around 40g of CO 2 equivalents per kilowatt hour, the average of the entire Swiss electricity mix - i.e. including imports - is around 108g. "In peak hours, it can even be as much as 600g," says Martin Rüdisüli of Empa’s Urban Energy Systems Lab. If we want to keep the CO2 impact of the Swiss electricity mix low, we need to take a closer look at these imports. Until now, data on GHG emissions from imported electricity have been based on average values. In a new study, researchers from Empa and the University of Geneva have now analyzed electricity imports on an hourly basis and simultaneously included both the direct and indirect CO2 emissions of electricity production.

Due to increasing electrification, the researchers expect an additional electricity demand of around 12 terawatt hours (TWh) per year. That’s a good 20% more than we consume today. "At the same time, we need to replace nuclear power, as the Federal Council plans to phase out nuclear energy," explains Elliot Romano of the Department for Environmental and Aquatic Sciences at the University of Geneva. The replacement will be with renewables, which, however, are much more volatile - meaning they don’t occur at a steady rate - and thus, in turn, significantly affect the amount and timing of electricity imports.

With this in mind, the researchers have developed various scenarios and analyzed how the Swiss electricity mix should be composed in future so that imports (and thus also electricity-related GHG emissions) can be minimized. The study shows that the share of imported electricity in the Swiss electricity mix will increase in any case - and thus also CO2 emissions. Despite these higher "imported" emissions, however, the increasing electrification of heat and mobility will lead to up to 45% lower GHG emissions in the overall Swiss energy system.

In winter, Switzerland will continue to heavily depend on electricity imports due to lower yields from photovoltaics. The scenario that scored best in the study in terms of emissions reduction therefore envisages not only an expansion of solar energy to 25 TWh (from currently 2.7 TWh) but also a rather large share of wind energy of around 12 TWh (from currently only 0.1 TWh). "Wind energy accrues mostly in winter and at night," says Empa’s Rüdisüli. "So it can help reduce our dependence on imports during those times."

The authors of the study see an increasingly large challenge in the seasonal storage of energy. In all the scenarios, large surpluses of electricity are expected in summer due to the foreseen expansion of photovoltaics. The researchers see the greatest potential for transferring these surpluses into the winter in Power-to-X technologies, which enable the conversion of surplus electricity into storable chemical energy carriers such as hydrogen or synthetic methane, and in thermal storage systems such as borehole thermal energy storages. 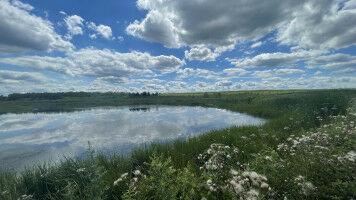 Related Stories
Physics
Attitudes towards green energy affected by fracking debate - 03.02
New form of ice is like a snapshot of liquid water - 02.02