Pollutant concentration increases in the franciscana dolphin, one of the most threatened species worldwide 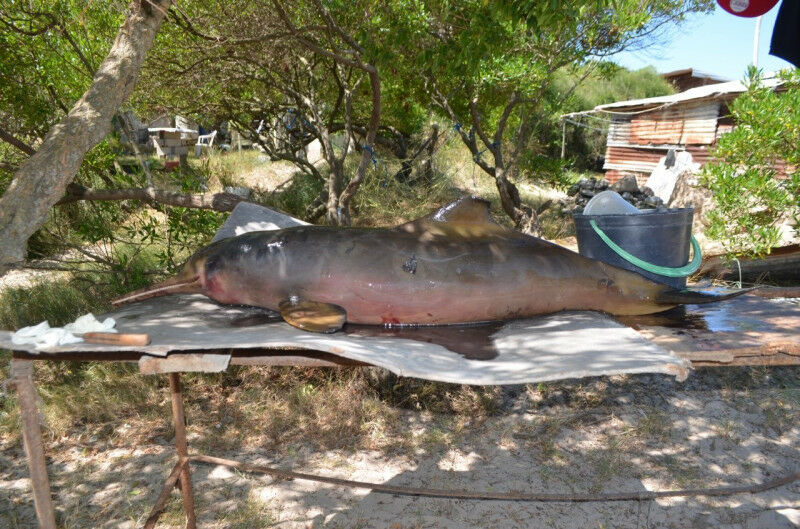 The franciscana dolphin is considered the most threatened cetacean in the southwestern Atlantic Ocean. Photo: Meica Valdivia, MNHN

The concentration of potentially toxic metals is increasing in the population of the franciscana dolphin -a small cetacean, endemic from the Rio de la Plata and an endangered species- according to a study led by a team of the Faculty of Biology and the Biodiversity Research Institute (IRBio), published in the journal Science of The Total Environment .

The impact of human activity in the region could be the cause for the increase of trace elements such as chromium, copper, iron and nickel in the dolphins’ biological tissues, as stated in the study. The paper counts on the participation of members from the National History Museum of Uruguay, and is subsidized through a project of the research and conservation program of the Barcelona Zoo Foundation, with Massimiliano Drago (UB-IRBio) as principal researcher.

One of the smallest and most threatened dolphin species worldwide

The franciscana dolphin (Pontoporia blainvillei) is an endemic species of the marine regions of Brazil, Uruguay and Argentina, and it is considered a vulnerable species according to the International Union for the Conservation of Nature (IUCN). Currently, it is considered the most threatened cetacean in the southwestern Atlantic Ocean, and its population decreased due to accidental bycatches that accelerated by mid-20th century with the artisanal shark fishing to take vitamin A. Now, the future of this species is in danger due to accidental fishing -it causes between 1200 and 1800 dolphin deaths every year, mainly juvenile ones- and the progressive degradation of the environment due to the impact of maritime transport, tourism and environmental pollution.

The Rio de la Plata estuary, in the western coast of the southwestern Atlantic Ocean, is one of the richest and most productive ecosystems worldwide. It is an affected marine region by the anthropogenic activity (maritime transport, industry, expansion of urban areas, untreated wastewaters, etc.) which favours the accumulation of pollutants. Also, the estuary receives the transported pollutants by the water network of the river branches of the Parana and Uruguay rivers and other secondary rivers. With more than three million kilometres of expansion, this large water system transports a great volume of water masses that are highly polluted during their passing for big towns and urbanized regions in the South American continent.

In the internal area of the estuary -the most polluted one- there is a lot of freshwater from river branches and the waste from nearby cities (Buenos Aires, Montevideo, la Plata, etc.). The area in the middle has freshwater with marine influence and is less polluted while the external area has salty waters with a salinity gradient. There are marine currents, generated by the regime of tides in the estuary, that drive the entrance of the marine water in the intermediate area and the exit of freshwater towards the external section.

The pollutants such as polychlorinated biphenyl, pesticides, hydrocarbons, plasticizers, or some metals can be endocrine or cancer disruptors, and they can cause adverse reproductive effects or osteoporosis, among others. Among the pollutants that are thrown into the estuary "are trace elements, which are specially worrying, such as certain heavy metals that can be highly toxic for the marine fauna and indirectly, for humans", notes Odei García-Garín, first author of the article and member of the Research Group on Large Marine Vertebrates, led by Professor Àlex Aguilar.

Anthropogenic activities could be the origin of the growing concentration of metals in marine mammals, as stated in the study. The trace elements coming from the waste of the industries of leather, petroleum refineries and painting from boats would accumulated progressively in the sediments of the Rio de la Plata estuary and eventually, in the tissue of the franciscana dolphins. Contrary to this, the prohibition from the nineties to use lead as additive in fossil fuel involved the progressive reduction of the concentration of this metal in the dolphins’ bones.

The paper published in Science of the Total Environment confirms the suitability of the trace element studies on bone remains conserved in museums or private collections to conduct large-scale temporary studies. Using this methodology, we can analyse both the impact of pollutants on a species in temporary series and the evolution of compounds in the environment.

Protecting the franciscana dolphin for the conservation of the marine environment

The franciscana dolphin is an apical marine predator and plays an essential role in the marine ecosystem. It shapes the abundance of several species -fish, octopuses, prawns, etc.- that hold a medium trophic level in the ocean. Therefore, if the population of Franciscan dolphins decreases, it would completely alter the whole trophic marine network in the estuary. "In addition, the franciscana dolphins act as an ’umbrella’ species. That is, protecting their populations would benefit many other species whose viability depends on the presence of the franciscana dolphin in the marine ecosystem", notes Odei García-Garín, member of the Department of Evolutionary Biology, Ecology and Environmental Sciences and IRBio.

"In order to improve the survival of the species, we need to reduce the accidental fishing as the first urgent measure", continues García-Garín. "Since juvenile individuals are the most affected ones, it would be important to implement ban periods during the breeding seasons, the most critical ones for the species. Promoting fish farms would help reduce the accidental fishing, although this measure could bring other negative effects for the marine environment (eutrophication and contamination by the waste produced by fish farms, etc.). "It would be convenient to create or expand marine reserves where the species live and reduce the contamination produced by large cities and industries -improvement of wastewater treatment systems and rivers that run into the sea, -also key strategies to improve the conservation of this vulnerable mammal", concludes the researcher.

Nanocontainers made of biological materials to enter cells - 03.08

Brain cortex may regulate the need for sleep - 03.08
This site uses cookies and analysis tools to improve the usability of the site. More information. |