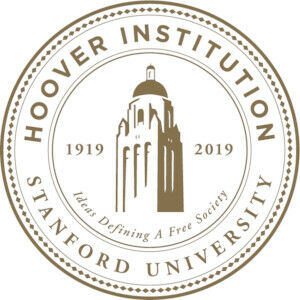 Policy innovation and intellectual discoveries marked the Hoover Institution’s first one hundred years, and an even bigger stage is set for a second century of breakthroughs.

This year, the Hoover Institution celebrates its centennial with events, discussions, and an exhibition commemorating the one-hundred-year-old think tank, which stands today as the world’s preeminent archive and policy research center dedicated to freedom, private enterprise, and effective, limited government.

One of a kind, Hoover’s influence is as far-reaching as it is profound in the circles of US policy-making and scholarship. Launched in 1919 by Herbert Hoover, the institution is unique among American think tanks for its library and archival collections, connection to a university like Stanford, and primary residence on the West Coast-though it also offers the Hoover Institution in Washington.

Hoover’s location offers intellectual as well as geographical benefits, arguably giving scholars a more detached, bird’s-eye perspective on the DC policy landscape and the issues of our tumultuous world. As the late Milton Friedman , economist and senior fellow, once said, "The great achievements of civilization have not come from government bureaus," and "The problem in this world is to avoid concentration of power-we must have a dispersion of power."

The fellows are an interdisciplinary group of humanists, political and social scientists, and natural scientists who study economics, education, energy, foreign affairs, health care, history, law, national security, and politics. Their fundamental mission and the spirit of their enterprise is encapsulated in the Hoover Institution’s official slogan, "Ideas Defining a Free Society."

For example, in the wake of the 2008 financial crisis, Hoover launched a new initiative that aims to improve economic policy by strengthening the analytical tools used by policy makers.

And that’s just the tip of the iceberg. Fellows’ productivity and policy impacts through the decades are legion.

In 1959, Herbert Hoover issued a new mission statement for his institution, setting it on a path to evolve beyond its traditional role as a research library into a public policy research center focused on American freedoms and values. That statement said, in part, "Ours is a system where the Federal Government should undertake no governmental, social or economic action, except where local government or the people cannot undertake it for themselves."

A decade later, the Hoover Institution created a Domestic Studies Program to complement its earlier exclusive focus on international studies.

Then, beginning in the 1970s, the Hoover Institution generated many policy papers and op-eds in the area of government regulation, income redistribution, health, social security, energy, tax policy, and government expenditure limitation proposals.

In this way, Hoover positioned itself in the center of a national conversation over the appropriate role of the federal government in the economy and society.

With the election of Ronald Reagan in 1980, innovative public policy proposals that had been developed at Hoover in the 1960s and 1970s spread to virtually every dimension of government policy.

Over the decades, Hoover fellows contributed staunch anti-communist policy ideas, joining the Cold War fight for freedom that led to the eventual collapse of the former Soviet Union in 1991.

Since the early 1990s, the institution has focused broadly on economic prosperity, democratic governance, and national security.

Throughout the Hoover Institution’s history, supporters and fellows have worked together in public policy to address the most important issues of our time, helping promote prosperity, peace, and the exceptional foundations of our country.

"We started as a library set up by then-citizen Herbert Hoover in order to gather papers that explored the causes of war," he said. "What are the predicates of peace? How do societies, free societies, govern themselves in ways that avoid conflict? That remains a focus of the Hoover Institution today. We continue to host thousands of researchers every year to uncover knowledge about the causes of war."

Gilligan described the centennial as a "yearlong celebration of lifting up our values to as many people as we possibly can." For example, Hoover is recasting its strategic plan to answer the questions, "What do we want to be in the second century? What do we want to aspire to? What we want to do?" We want to apply the values of the Hoover Institution to research that informs public policy.

Gilligan noted that Hoover will spread this message to policy makers in Washington and the states as well as the general public. "The occasion of our centennial celebration affords us the opportunity to remind everybody what our values are. How durable they are. How they can take flight in current public policy debates."

From fellows to staff and leadership, Hoover’s team is prepared for even greater impact in the years ahead, guiding the country’s policy makers, informing the marketplace of ideas, and illuminating the road to prosperity and peace in America and around the world.

The Library & Archives plans to hold an exhibition starting in June 2019 on the first hundred years of the Hoover and how it’s offered scholars and the public important material on war, revolution, and peace in the twentieth and twenty-first centuries.

L&A offers extensive holdings on the Cold War, the Russian Revolution and the Soviet Union, World Wars I and II, and political and ideological movements of the twentieth century.

The Library & Archives is undergoing a physical transformation now, having closed its reading rooms in December to most non-Stanford-affiliated scholars, with an expected reopening in the early months of 2020. During this period, collecting, the exhibition program, digitization projects, and other activities will continue. Exhibitions and the Hoover Tower Rotunda will be open during this time.

Eric Wakin , deputy director and Robert H. Malott Director of Library & Archives, said the changes are part of a multiyear master plan that will see new and improved facilities across the Hoover campus and a new strategic vision for the Library & Archives.

"These changes will result in state-of-the-art storage facilities for our collections, improved digitization facilities, a shift in our exhibition gallery, and more," said Wakin.

With the forthcoming changes, Wakin said L&A will enter its second century with expanded abilities to collect, preserve, and offer scholars the critical information they need for the study of war, revolution, peace, freedom, and liberty.

The Library & Archives has been indispensable to Jennifer Burns ’s research on Ayn Rand and Milton Friedman.

"Thanks to the archive’s careful preservation of materials from student movements of the 1960s-unique items like mimeographed newsletters, memoirs, and membership lists of student clubs and groups-I was able to show how important Ayn Rand’s ideas were to conservative youth, and provide a more accurate picture of the conservative movement and the diversity of thought on college campuses," she said.

Burns said L&A is the foundation of the book she’s currently writing on Friedman.

"I’ve been able to find out everything from when he read John Stuart Mill (first year in graduate school) to his favorite meals at the University of Chicago Quadrangle Club (ice cream was a staple of his diet!). I’ve also been able to reconstruct the role of different collaborators and colleagues in his life-most significantly, women like his wife, Rose Director Friedman, and his coauthor, Anna Schwartz," she said.

"A final benefit of the archive has been the community of scholars it supports," Burns added. "As faculty director of the Political Economy Workshop, I’ve welcomed over fifty scholars to the archive and witnessed them make serendipitous discoveries or find documents believed lost or destroyed. Many in turn have then pointed me to boxes and letters of interest for my book. And it is not unusual to bump into an old friend, or meet somebody new, crossing the courtyard to the archive or checking in at the circulation desk."

Bertrand Patenaude’s work as a historian has been greatly helped by L&A.

"Two of the three books that I have authored, another that I have edited, and about two dozen articles that I have published over the years have all been based almost exclusively on the collections in the archives. And my 2009 book about the exile and murder of Leon Trotsky succeeds in large part thanks to the richness of our collections on Trotsky’s life and death in Mexico from 1937 to 1940," he said.

Patenaude said the Library & Archives enters a new century well positioned to remain on the cutting edge as a center for advanced research and publication, thanks to innovative leadership, a multipronged digitization program, including a new portal for searching digital collections, and important new collections and additions to existing ones.

When the David and Joan Traitel Building opened in September 2017, it marked a transformative step forward for the Hoover Institution.

Not only is Traitel’s Hauck Auditorium now one of the most prized and busiest event venues on campus, but the building’s public entrance built a bridge between Hoover and the Stanford campus.

Amplifying the Traitel impact will be the forthcoming George P. Shultz Building. Part of a long-range master plan to reinvigorate Hoover’s existing facilities, the project is envisioned as a four-story, 58,000-square-foot structure to replace the existing Lou Henry Hoover Building.

The new building will incorporate three levels of offices for Hoover fellows and research support staff, one level of conference space, and a lower level dedicated to priority archival functions, including digitization. It will offer much needed event space to host speakers, roundtable discussions, leadership policy forums, conferences, and other events.

With these improvements, Hoover’s master plan reflects a vision and objectives for the decades ahead. The goal is to reinvigorate Hoover’s campus area in ways that complement the Traitel Building as well as Stanford architecture while preparing itself to carry forward the Hoover mission.

Herbert Hoover himself reflected on that mission in his 1959 statement, which read in part, "This Institution is not, and must not be, a mere library. But with these purposes as its goal, the Institution itself must constantly and dynamically point the road to peace, to personal freedom, and to the safeguards of the American system."

Peace was foremost on Hoover’s mind. The 285-foot Hoover Tower , completed in 1941, has a carillon of forty-eight bells, with the Latin phrase, "Uno pro pace sono," which means "for peace alone do I ring," inscribed on the largest one.

The Hoover Institution is America’s think tank, mobilizing policy ideas and pioneering the principles of peace and freedom at an urgent time in our nation’s political history. The foundation has been laid for the next one hundred years.

Established one hundred years ago by Herbert Hoover at his alma mater, Stanford University, the Hoover Institution marks its centennial in 2019. From its initial charge to collect materials documenting the experience of war and the pursuit of peace, the institution stands today as the world’s preeminent archive and policy research center dedicated to freedom, private enterprise, and effective, limited government.

In photos: University of Toronto commemorates Queen Elizabeth II’s life of service with ceremony at Soldiers’ Tower - 19.09
This site uses cookies and analysis tools to improve the usability of the site. More information. |