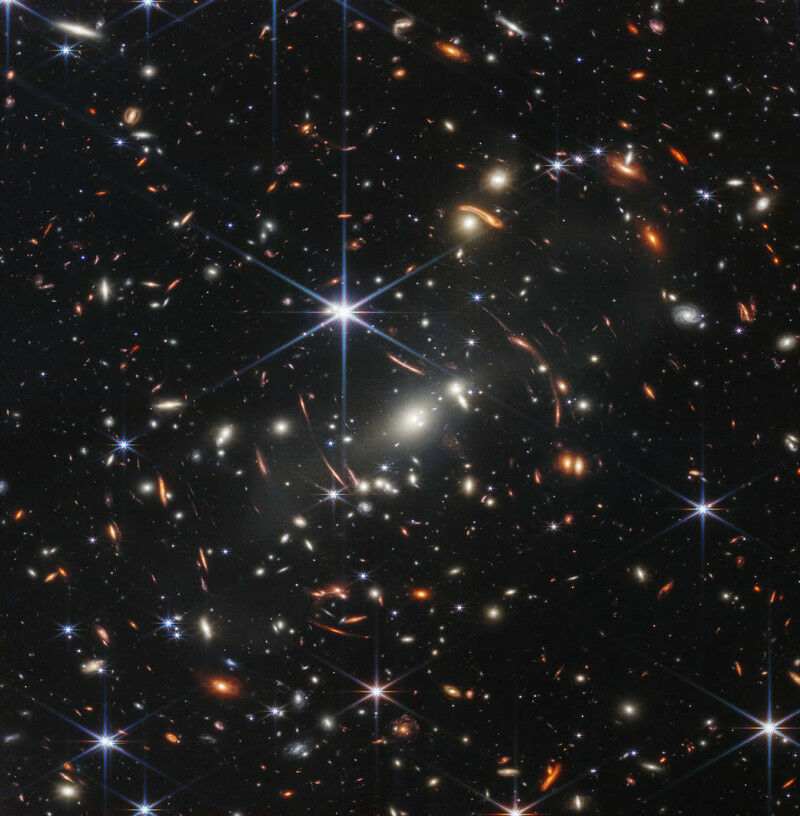 The image - which focuses on a spot in the sky that, from the perspective of someone on the ground, is about the size of what would be covered by a grain of sand held at arm’s length - reveals thousands of galaxies, including the faintest objects ever observed in the infrared.

"Webb’s First Deep Field is not only the first full-color image from the James Webb Space Telescope, it’s the deepest and sharpest infrared image of the distant universe, so far. This image covers a patch of sky approximately the size of a grain of sand held at arm’s length. It’s just a tiny sliver of the vast universe," said NASA Administrator Bill Nelson. "This mission was made possible by human ingenuity - the incredible NASA Webb team and our international partners at the European Space Agency and the Canadian Space Agency. Webb is just the start of what we can accomplish in the future when we work together for the benefit of humanity."

"What an incredible honour for ESA and its international partners to reveal Webb’s first image from the White House," says ESA Director General Josef Aschbacher.

"Only with teamwork, dedication, and the human drive to push boundaries and explore have we arrived at this historical moment of seeing the deepest view of the early Universe to date."

Known as Webb’s First Deep Field, this image features the galaxy cluster SMACS 0723, which is overflowing with detail.

"We are now even more excited for tomorrow’s release of further images and spectra from ESA-contributed instruments, which add another dimension to the Deep Field and the other stunning cosmic targets," says ESA’s Director of Science, Günther Hasinger. "We are ready to begin our voyage back to early days of our Universe with this world-class observatory."

"This is just a first glimpse of what Webb can do," says Macarena Garcia Marin, MIRI ESA Instrument Scientist. "While we are truly in awe today of Webb’s first deep field, I can’t help but think of what images and science results are just around the corner in the many years to come!"

This image is among the telescope’s first-full colour images. The full suite will be released Tuesday 12 July, beginning at 16:30 CEST (a leadership address will be aired beforehand, at 15:45 CEST, and a media briefing will follow at 18:30 CEST). The full array of Webb’s first images and spectra, including downloadable files, will be made available here: https://esawebb.org/initiatives/webbs-first-images/

Webb is the largest, most powerful telescope ever launched into space. As part of an international collaboration agreement, ESA has provided the telescope’s launch service using the Ariane 5 launch vehicle. Working with partners, ESA was responsible for the development and qualification of Ariane 5 adaptations for the Webb mission and for the procurement of the launch service by Arianespace. ESA has also provided the workhorse spectrograph NIRSpec and 50% of the mid-infrared instrument MIRI, which was designed and built by a consortium of nationally funded European Institutes (The MIRI European Consortium) in partnership with JPL and the University of Arizona.

Webb is an international partnership between NASA, ESA and the Canadian Space Agency (CSA).