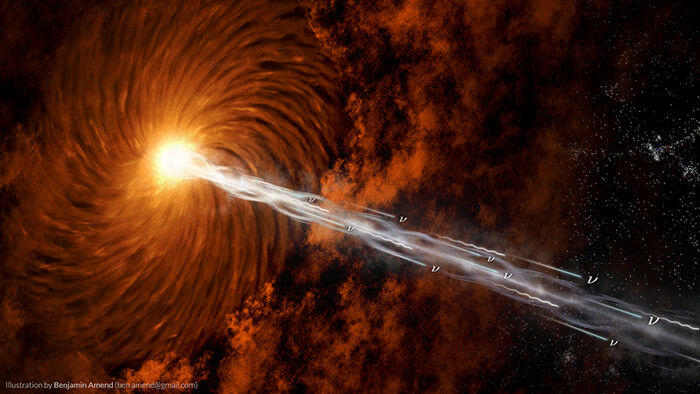 An artistic illustration of a blazar accelerating cosmic rays, neutrinos and photons up to high energies, as observed in PeVatron blazars.

Neutrinos that reach our planet from the depths of the Universe originate from blazars. Astrophysicists have proven this for the first time.

The Earth’s atmosphere is continuously bombarded by cosmic rays. These consist of electrically charged particles of energies up to 1020 electron volts. That is a million times more than the energy achieved in the world’s most powerful particle accelerator, the Large Hadron Collider near Geneva.

The extremely energetic particles come from deep outer space, they have travelled billions of light years. Where do they originate, what shoots them through the Universe with such tremendous force? These questions are among the greatest challenges of astrophysics for over a century.

Cosmic rays’ birthplaces produce neutrinos. Neutrinos are neutral particles difficult to detect. They have almost no mass and hardly interact with matter. They race through the Universe and can travel through galaxies, planets and the human body almost without a trace.

Despite the vast amount of data which astrophysicists have collected, the association of high-energy neutrinos with the astrophysical sources that originate them has been an unsolved problem for years. Sara Buson has always considered it a major challenge.

It was in 2017 that the researcher and collaborators first brought a blazar (TXS 0506+056) into the discussion as a putative neutrino source in the journal Science. Blazars are active galactic nuclei powered by supermassive black holes that emit much more radiation than their entire galaxy. The publication sparked a scientific debate about whether there truly is a connection between blazars and high-energy neutrinos.

Following this first encouraging step, in June 2021 Prof. Buson’s group began an ambitious multi-messenger research project with the support of the European Research Council. This involves analysing various signals ("messengers", e.g. neutrinos) from the Universe. The main goal is to shed light into the origin of astrophysical neutrinos, possibly establishing blazars as the first source of extragalactic high-energy neutrinos with high certainty.

The project is now showing its first success: In the journal Astrophysical Journal Letters, Sara Buson, along with her group, the former postdoc Raniere de Menezes and with Andrea Tramacere from the University of Geneva, reports that blazars can be confidently associated with astrophysical neutrinos at an unprecedented degree of certainty.

"We utilized neutrino data collected by the IceCube Neutrino Observatory in Antarctica - the most sensitive neutrino detector currently in operation, and a catalog of astrophysical objects confidently identified as blazars," says the JMU professor.

"We performed a cross-correlation analysis between the IceCube data and blazars, and found strong evidence that a sub-set of blazars originates the observed high-energy neutrinos. The probability of this being a coincidence is very low, as low as 6 × 10-7, i.e. less than one in a million. The results provide, for the first time, incontrovertible observational evidence that the sub-sample of newly-discovered PeVatron blazars are extragalactic neutrino sources and thus cosmic ray accelerators."

According to Sara Buson, the discovery of these high-energy neutrino factories represents a major milestone for astrophysics: "It places us a step forward in solving the century-long mystery of the origin of the cosmic rays".

Only the tip of the iceberg

Despite this success, the JMU researcher is aware that there is still much exciting work to be done. She quotes the 17 century scientist Blaise Pascal: "Knowledge is like a sphere: the greater its volume, the larger its contact with the unknown."

This also applies to Buson’s research: "What we are observing is only ’the tip of the iceberg’, i.e., possibly the brightest most efficient neutrino emitters." In fact, she says, our statistical analysis has focused only on the most promising sets of the IceCube neutrino data. Buson expects that further sophisticated analytical techniques may bring more discoveries.

The PeVatron blazars are a new challenge for multi-messenger astrophysics, she said: "What makes this set of blazars so special among the thousands of comparable objects in our Universe? This question, among others, will keep our multi-messenger community busy for decades to come."