Sleeping together: Examining dormitories as architectural types
A recent publication explores the unique history of dormitories from the Middle Ages to present day.
History / Archeology - 23.01.2023

University of Glasgow experts reveal fascinating new insight into Robert Burns domestic life
An astonishing discovery found at a 13 century Scottish castle has shed new light on the day-to-day domestic life of Robert Burns and his family, academics at the University of Glasgow have revealed.
Environment - History / Archeology - 19.01.2023
Archaeologists shed light on the lives of Stone Age hunter-gatherers in Britain
A team of archaeologists from the Universities of Chester and Manchester has made discoveries which shed new light on the communities who inhabited Britain after the end of the last Ice Age. Excavations carried out by the team at a site in North Yorkshire have uncovered the exceptionally well-preserved remains of a small settlement inhabited by groups of hunter-gatherers around ten and a half thousand years ago.
History / Archeology - 19.01.2023

Performing Nazism: Why would you wear the Holocaust like a costume?
Physics - History / Archeology - 17.01.2023

Swimming Against the Current
In 1986, UZH physicist and IBM Fellow K. Alex Müller and his colleague J. Georg Bednorz revolutionized solid-state physics with the discovery of the first high-temperature superconductor.
History / Archeology - 16.01.2023
A history of how Indigenous Americans discovered Europe
A new book from a University of Sheffield academic flips the script on the accepted narrative that modern global history began when the 'Old World' encountered the 'New' On Savage Shores highlights t
History / Archeology - Campus - 12.01.2023

Mainz University contributes to recent discovery of the temple of Poseidon located at the Kleidi site near Samikon in Greece
Natural Hazard Research and Geoarchaeology team of JGU is investigating coastal developments in Western Greece over the last 11,600 years The ancient Greek historian Strabo referred to the presence of an important shrine located on the west coast of the Peloponnese some 2,000 years ago. Remains of such an Archaic temple have now been uncovered at the Kleidi site near Samikon, which presumably once formed part of the sanctuary of Poseidon.
Art and Design - History / Archeology - 09.01.2023

Humans spread fascioliasis since the Neolithic and caused its genetic variation
A multidisciplinary analysis led by Santiago Mas-Coma, emeritus full professor of Parasitology at the University of Valencia (UV) and published in Clinical Microbiology Reviews , reveals the strategie
History / Archeology - Campus - 21.12.2022

Chalets provide insight into our relationship with mountains
Chalets have been widely adopted as the standard form of architecture for mountain homes - but according to Patrick Giromini, an architect and lecturer at EPFL, it's worth taking a close look at why.
Campus - History / Archeology - 06.12.2022
Käthe Leichter Forum to be Opened: New Centre for Doctoral Students
Named after a student of Max Weber who earned her doctorate at Heidelberg University and was murdered by the National Socialists in 1942 Käthe Leichter (1895-1942), who did her doctorate with the emi
History / Archeology - 06.12.2022
Q&A: Pouya Alimagham on the protest movement in Iran
Women and girls are at the forefront of the uprising, which is rooted in Iranians' long struggle for freedom, notes the MIT historian.
History / Archeology - Religions - 05.12.2022

Translations trace the path of knowledge
Philip Bockholt researches the history of the Turkish-Persian world using historical manuscripts When historians devote their attention to translations, they are not primarily concerned with the language.
History / Archeology - 29.11.2022 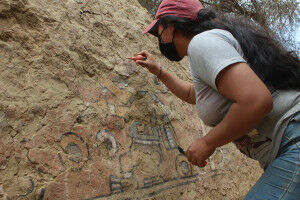 Major archaeological discovery in Peru
We had met him at the beginning of the year so that he speaks to us about his archaeological excavations in Peru.
History / Archeology - 24.11.2022

Ancient Roman coins reveal long-lost emperor
A gold coin long dismissed as a forgery appears to be authentic and depicts a long-lost Roman emperor named Sponsian, according to a new UCL-led study. The coin, housed at The Hunterian collection at the University of Glasgow, was among a handful of coins of the same design unearthed in Transylvania, in present-day Romania, in 1713.
History / Archeology - Earth Sciences - 22.11.2022

Feature: Hunting for Neanderthal spear tips under the sea
A UCL-led team of archaeologists found spear tips and other stone tools that have been submerged under the English Channel since the last ice age, providing new clues about our Neanderthal past.
History / Archeology - 22.11.2022

Opinion: The era of the megalopolis: how the world’s cities are merging
History / Archeology - Earth Sciences - 22.11.2022

Hunting for Neanderthal spear tips under the sea
A UCL-led team of archaeologists found spear tips and other stone tools that have been submerged under the English Channel since the last ice age, providing new clues about our Neanderthal past.
History / Archeology - 22.11.2022
U-M surveys reveals five patterns in consumer responses to inflation
People are scaling back their spending habits and changing attitudes toward saving and borrowing after a year and a half of high inflation, according to a special report from the University of Michigan's Surveys of Consumers. Consumers reported an all-time low of consumer sentiment this summer. By October 2022, year-ahead inflation expectations were 5% and long-run expectations were 2.
History / Archeology - 21.11.2022
Jesper Verhoef is the new ’Researcher-in-Residence’ at the KB with research on LGBTQI+ websites
The Royal Library (KB) in The Hague has selected historian and media scholar Jesper Verhoef as KB Researcher-in-Residence 2023 .
History / Archeology - Event - 21.11.2022
BB: Child-Animal Encounters in SEE literature
Präsenz-Veranstaltung 22. VeranstalterIn Zentrum für Südosteuropastudien & SOEGA Veranstaltungsort: Beethovenstraße 8, SR 111.
History / Archeology - 18.11.2022

A drama play set in the Revolt of the Brotherhoods puts an end to an investigation into the public uses of cities in the Renaissance
Campus - History / Archeology - 18.11.2022

Uncovering the rich connections between South Asia and MIT
Showcased in a new exhibit, student research explores the long history of South Asians at the Institute.
History / Archeology - 16.11.2022
Through the dust to the stone: A visit to an archaeological excavation in south-eastern Turkey
Every year, members of the Asia Minor Research Centre at Münster University spend several weeks in the summer in south-eastern Turkey to study the archaeological remains of the village of Doliche.
History / Archeology - Paleontology - 15.11.2022

Nicolás Bodin, in 1739, who best shows the pre-industrial landscape of El Grau of Valencia among 16 historical maps and engravings
The full professor of Geography at the University of Valencia Josep Vicent Boira has studied what the landscape of El Grau of València was like in pre-industrial times through 16 engravings and maps by different authors.
History / Archeology - 14.11.2022
ISR, partners conduct first national study of public libraries’ Black History Month programming
Researchers from the Institute for Social Research at the University of Michigan have received a $750,000 research grant to conduct a survey of Black History Month programming in public libraries across the country.
Event - History / Archeology - 11.11.2022

More short news
This site uses cookies and analysis tools to improve the usability of the site. More information. |