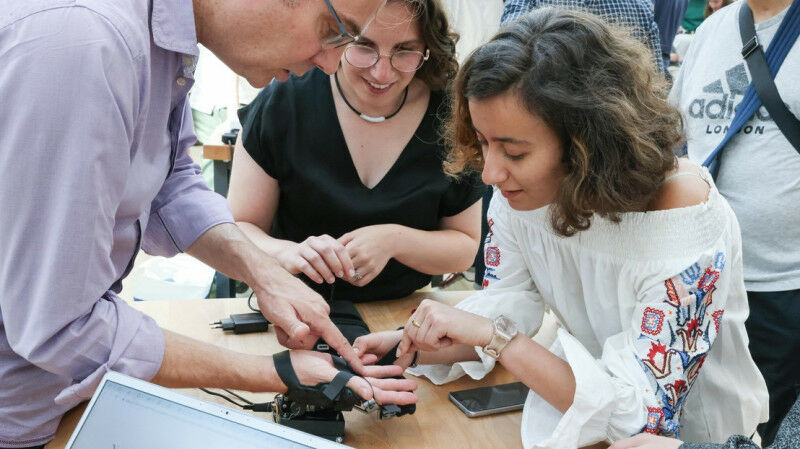 Five years ago, César had a stroke that left him hemiplegic and therefore unable to use his left hand. Swan, a 15-year-old, suffers from dropped head syndrome. Caroline, who works in adult education, was born with hand deformities that make it hard for her to use a keyboard. Balz is another stroke survivor: his left hand is completely paralyzed. And then there’s Andrea, a keen artist who was left tetraplegic by a skiing accident and who loves to paint in his spare time. These five people asked students taking EPFL’s Assistive Technologies Challenge class to design bespoke solutions to the challenges caused by their motor impairments. 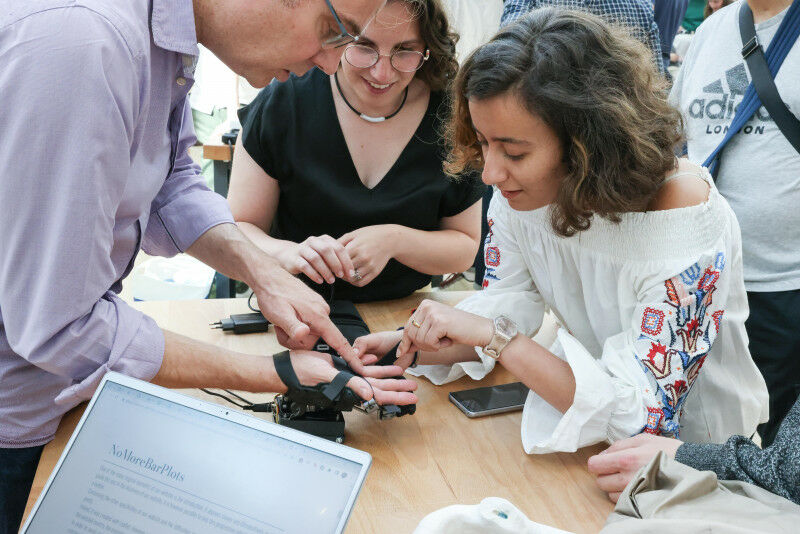 As part of the class, students from the mechanical engineering, microengineering, electrical engineering and materials science sections were divided into to small groups. "The idea is to create cross-disciplinary teams where each member contributes specific subject-matter expertise," explains Alice Bruel, who coordinates the class. The students were given one semester to develop a technology, device or prototype for each of the five motor-impaired patients. They unveiled their designs at a joint presentation in early June. "Each group worked directly with a disabled person to come up with something that directly addresses his or her needs," adds Bruel. The groups were each given a budget of CHF 1,000 to purchase the materials they needed.

"I wanted to be able to open and close my left hand so I could grip objects and perform basic tasks like slicing bread or opening a bottle," says César. His group designed a robotic hand brace that uses a tiny motor to bend and straighten the fingers. "It was an incredibly rewarding and instructive experience," says microengineering student Nour Tnani. At this stage, the device is still a prototype: it needs fine-tuning before César can use it in his day-to-day life. The students hope the design will be picked up and refined in the next session of the class. 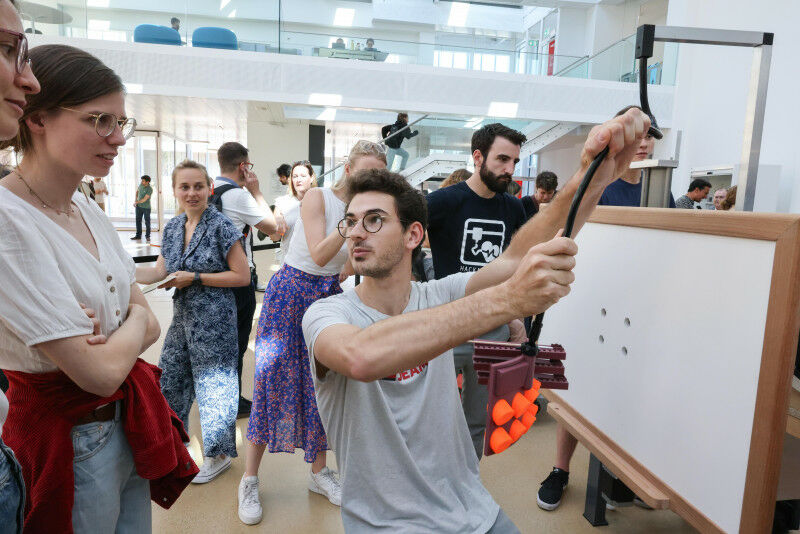 To help Andrea pursue his love of painting, his group developed a robotic easel that can be moved using a voice-control system. "Because Andrea can’t move his arms and paints with the brush in his mouth, we decided it would be helpful if the canvas moved instead," says mechanical engineering student Sébastien Franca. The group considered every last detail, even programming the voice-control system to respond to English commands so that it wouldn’t be activated when Andrea is speaking with others in French. 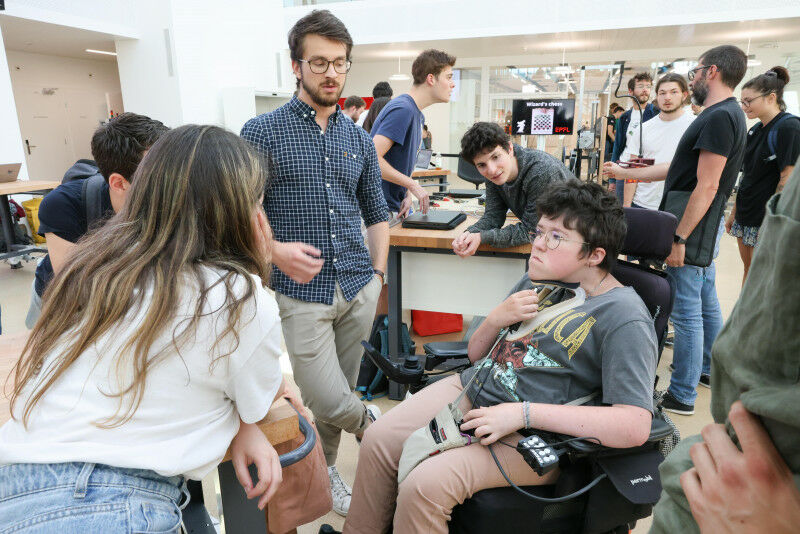 Swan’s team designed an improved neck brace: it’s shaped like his existing brace but includes a piston-actuated system that allows him to raise and lower his head on his own. The device is powered by a small battery attached to his wheelchair. "It’s really cool," says Swan. "This new neck brace means I can lift my head without having to ask for help."

For Balz, the students linked a camera that films his fingers to a software program that converts the filmed movements into specific commands on his computer. "For instance, when he moves his thumb, the system opens a window on his PC," explains microengineering student Thomas Peeters. "And when he bends his index finger, it turns on caps lock as he types with his right hand." 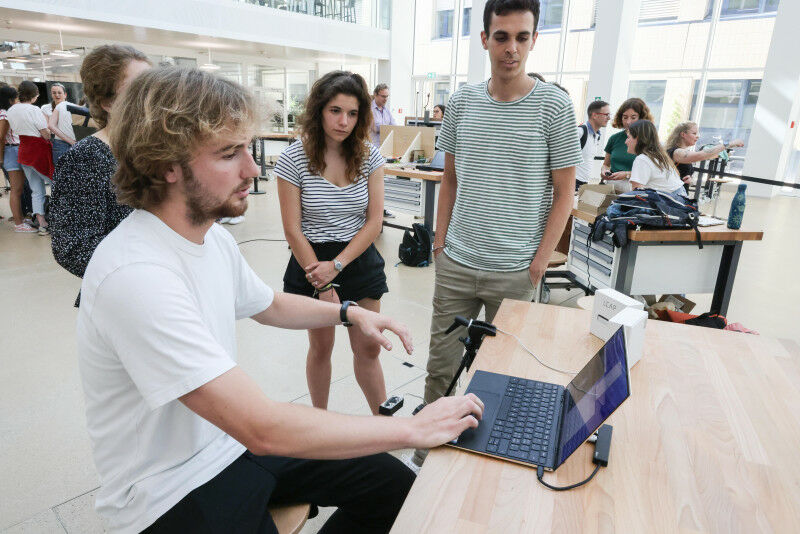 A camera linked to the keyboard shortcuts. © Muriel Greber 2022 EPFL

The fifth group designed a new keyboard for Caroline in order to reduce fatigue in her left hand, which is more affected by her impairment. "First, we built a desk stand to support her elbow," says microengineering student Arthur André. "Next, we developed a system that raises her touch-sensitive keyboard, which we reconfigured so that the keys she uses more often are closer to her right hand." Caroline explains: "I tried out several layouts until we found the one that suited me best. For instance, I asked the students to put the ’a’ and ’e’ keys on the right-hand side because I use those letters a lot."

"The groups assigned to Balz and Caroline had to do a lot of coding and programming work, while the other three groups focused more on solving mechanical problems," says Bruel.

Motor-impaired patients who wish to take part in next year’s class can email Bruel directly ( [email protected] ) or get in touch with her via the HackaHealth disability support organization. 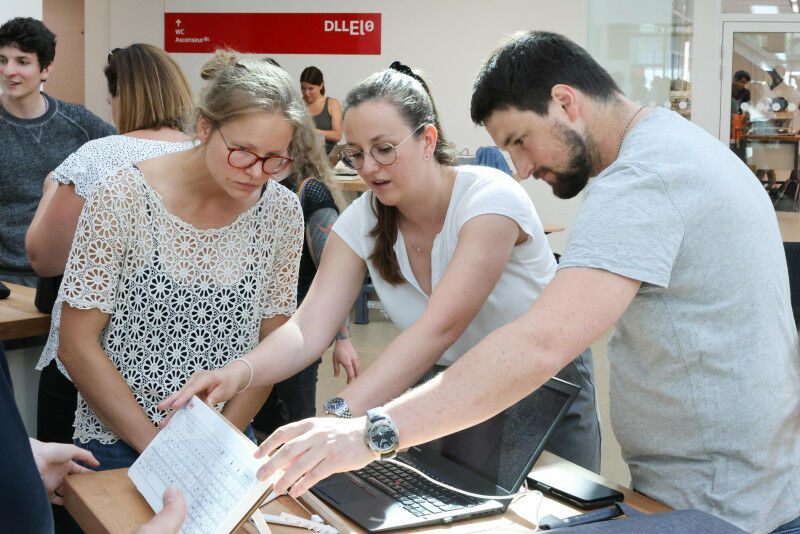 Solving a messy problem - 06.12.2022
This site uses cookies and analysis tools to improve the usability of the site. More information. |