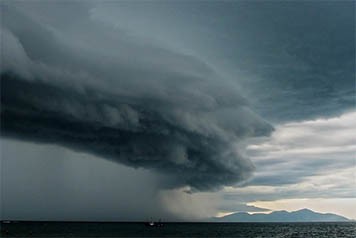 Researchers have managed to create a similar rain-seeding phenomenon in controlled laboratory conditions.

"The work is an important step in basic atmospheric science", says meteorologist Juan Pedro Mellado of the Max Planck Institute for Meteorology in Hamburg. Doing a similar experiment in atmospheric conditions is difficult because it’s hard to reproduce the right environmental conditions on a small scale or to closely monitor the wake behind the drop. He says the work provides "a clear example of how laboratory experiments of idealized problems can help us better understand atmospheric processes".

The work was conducted by Alain Pumir, of the Laboratoire de physique de l’ENS de Lyon and a team led by Eberhard Bodenschatz of the Max Planck Institute for Dynamics and Self-Organization in Göttingen, Germany

Cardiff University graduates competing at the Tokyo 2020 Olympic Games - 23.07
This site uses cookies and analysis tools to improve the usability of the site. More information. |