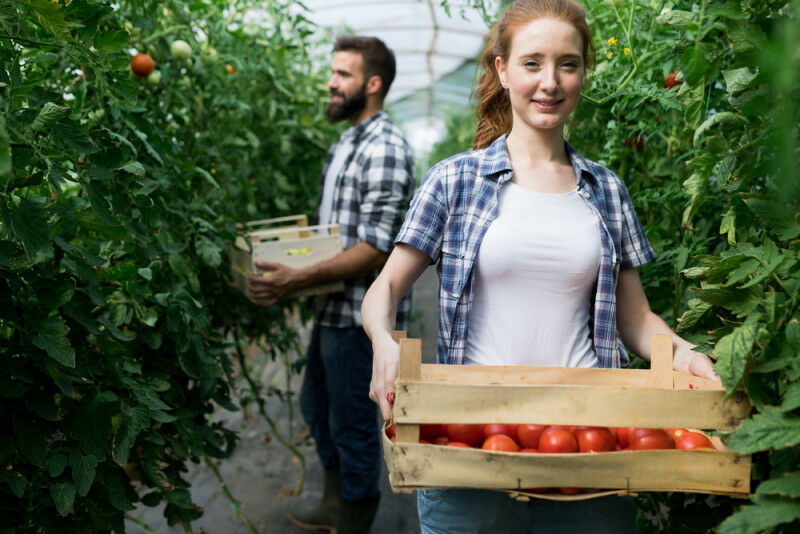 Of the 613 farmers who responded to the survey for this study, 49% were women (Photo: depositphotos)

Study shows that the more producers sell directly to consumers, the more they enjoy their work and the more economically satisfied they are

A major Leger survey has already revealed that dentists and hairdressers are among the happiest workers in Quebec. What about farmers? Sometimes they are really happy, for example in terms of recognition in society, sometimes it is very difficult in terms of remuneration. We wanted to measure the job satisfaction of producers in short circuits, those who sell directly to consumers, such as family farmers, or those who use an intermediary such as a restaurant," explains Stevens Azima.

D. student in agro-economics is the lead author of a study published in the journal Agriculture and Human Values, co-authored with Patrick Mundler, a professor in the Faculty of Agricultural and Food Sciences. They conducted an online survey of 613 farmers across Canada. This is groundbreaking work, as very few studies have been done at this scale, which is a country rather than a community," says Azima.

Of all the respondents, 38% were from Quebec, 85% had a post-secondary education, the vast majority had started their own business, 35% operated an organic farm and 51% were involved in agri-tourism," said the doctoral student.

Since all respondents were doing a minimum of short-line sales, the idea was to test whether those who relied more on short-line sales had higher satisfaction scores. The answer is yes, in terms of job satisfaction and economic satisfaction, and this after sensitivity tests that ensured the same results regardless of the approach.

No more social satisfaction... except in women

On the other hand, we did not find any relation for social satisfaction, Stevens Azima specifies. This does not mean that farmers in short circuits, who sell directly to consumers, are not socially satisfied, warns the doctoral student. Rather, it shows that greater involvement in these initiatives does not change their happiness in this regard. Of note, the average social satisfaction scores were quite high regardless of the situation.

However, one variable changes the results: gender. Female farmers report higher social satisfaction. In fact, 49% of the survey respondents were women. This in itself is a good indicator. There is a whole literature on the preponderant role of women in short circuits and in alternative systems in general, compared to the level of feminization in conventional agriculture," points out Stevens Azima, who is preparing another article on the subject.

One surprise for the researchers: producers who use an intermediary, such as a restaurant, hotel or institution, have less economic satisfaction. That doesn’t mean they don’t get a good deal. But intermediary channels often involve a great deal of logistics, efforts that can be important for, often, quite modest prices. This could perhaps explain this result, but it remains to be studied in greater depth," the doctoral student adds.

Farmers’ markets have long existed, but are now experiencing a resurgence. Organic food baskets and the Family Farmers Network are relatively new phenomena. Stevens Azima explains the craze by tracing it back in history. Starting in World War II, large-scale food marketing channels, from the production line to the grocery store, gradually took hold. But over time, they faced a range of criticisms, including social, environmental and economic. In response to these criticisms, parallel systems, with a strong emphasis on local food and proximity, developed at the turn of the century in Canada.

Although his study is based on data collected before the pandemic, Stevens Azima also notes that COVID-19 was a watershed moment when questions were raised about food sovereignty and the importance of buying local. Recent research tends to show that local food systems and short circuits seem to have been more resilient in this context, adds the doctoral student, who gave a presentation on the subject at the Acfas conference last May. Even if these alternative systems can’t replace the large marketing channels in the short term, it’s nice to have so many options.