Bright fireball may have dropped meteorites in Niagara region 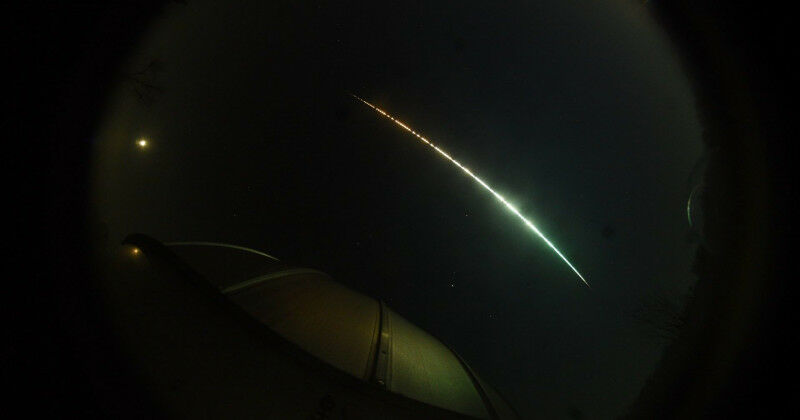 A timelapse image of the fireball event from start to finish. Image courtesy Western Meteor Group

A cosmic drama unfolded over southern Ontario on the night of Friday, Nov. 18, triggering an international collaboration and a meteorite hunt. Just before midnight Eastern time, the Catalina Sky Survey in Arizona detected a small object heading toward Earth.

This small asteroid, now designated 2022 WJ1, was followed by many observatories around the world for the next three hours before it impacted over southern Ontario at 3:26am EST on Nov. 19.

The few hours of advance warning about the asteroid impact allowed for several members of the Western Meteor Physics Group and the Institute for Earth and Space Exploration (Western Space) to move outside and find clear weather to watch the incoming object.

David Clark, a geophysics doctoral candidate, drove to the predicted fall area in the early morning hours and managed to see the fireball with his own eyes, parked near Niagara-on-the-Lake at the intersection of Hwy 403 and Niagara Regional Road 55 (formerly Highway 55).

"It passed right overhead at the predicted time and was distinctly green in colour," said Clark. "Several minutes later a noticeable sonic boom could be heard."

View of the fireball from Hume Cronyn Memorial Observatory at Western University.

"I watched from Brescia Hill on the Western campus. Though cold and windy, the hill had a clear view to the east, where I expected to see only a distant flash. Then the fireball suddenly appeared, passing almost overhead. Wow! It was easily visible between broken clouds and noticeably orange-red," said Wiegert.

Map of the ground track of the fireball to its end point (marked with black ’x’). The other dots indicate some of All-Sky Camera Network locations that observed the fireball.

The bright fireball produced by the terminal plunge of 2022 WJ1 was also observed by Western’s All-Sky Camera Network across southern Ontario at 03:26am on Nov. 19, just as predicted. The meteoroid entered the Earth’s atmosphere just south of Woodstock, proceeding eastwards as a bright fireball until its end at about until its end at an altitude of 20 kilometres north of the town of Vineland.

Analysis of the video data, also captured by cameras provided by Curtin University (Australia) within the Western network, suggests that fragments of the meteor are likely to have made it to the ground near the southern shore of Lake Ontario, mainly to the north of St. Catharines.

"This fireball is particularly significant as the parent meteoroid was observed telescopically before it hit the atmosphere. This makes it a rare opportunity to link telescopic data of an asteroid with its breakup behaviour in the atmosphere to glean insight into its internal structure," said Peter Brown , Canada Research Chair in Planetary Small Bodies at Western.

Only six other asteroids in history have had advance warning of their impact, with all cases having been detected just hours prior to their atmospheric entry. This is the first predicted event to occur over a heavily populated area and within range of dedicated instruments for fireball measurement.

Despite widespread cloud cover in southern Ontario during that period, six cameras in the All-Sky Camera Network detected the fireball along with Western’s Canadian Meteor Orbit Radar, providing an unprecedented record of this small asteroid’s disintegration in the atmosphere.

"This remarkable event will provide clues about the makeup and strength which when combined with telescopic measurements will inform our understanding of how small asteroids break up in the atmosphere, important knowledge for planetary defence," said Brown.

The last piece to this cosmic puzzle is recovering meteorites associated with the 2022 WJ1 fireball and researchers are requesting public assistance. Residents in the area between Port Weller and Virgil, in particular, should be on the lookout.

"We know from camera records and weather radar which tracked falling debris from the fireball that meteorites almost certainly made it to the ground near or east of Grimsby. What we need now to complete this story is to recover some of these rocks and find out what kind of material made up asteroid 2022 WJ1," said Brown. "This is very much like a sample return space mission, but in this case the sample fell on us."

Meteorites can be recognized by their dark, often scalloped exterior, a fusion crust that is only a millimetre deep, covering a grey stony interior. Usually, they will be denser than a ’normal’ rock and will often be attracted to a magnet due to their metal content. Meteorites are not dangerous, but if recovered, it is best to place them in a clean plastic bag or wrap them in aluminum foil. They should also be handled as little as possible to help preserve their scientific value. In Canada, meteorites belong to the owner of the land upon which they are found. If individuals plan to search, they should always obtain permission of the landowner before venturing onto private land.