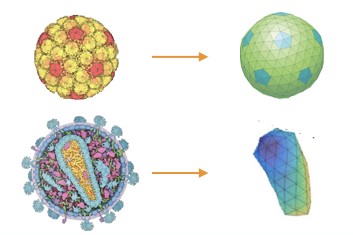 Geometrical and mechanical models of virus assembly. The mechanical stress during assembly determines globally the final shape of a virus: compact (e.g. virus SV40) or elongated (virus HIV-1).
Biological viruses are mainly made by the self-assembly of a genome and some proteins that are forming a closed shell. The role of this proteic shell called a capsid is to protect the genome. The main viral shape found in nature are twofold: either they are very regular and compact, adopting a geometry of icosahedra, or they are irregular and elongated, like the conical capsid of HIV-1, the pathogen responsible for AIDS.
What is the property at the single protein level that determines the global shape of a virus’ In order to answer this question, a team from the ENS de Lyon’s Physics lab was able to model the elastic energy associated to the self-assembly process. This team highlighted the particular role of spontaneous curvature, which is an intrinsic property of the proteic surface that quantify its ability to be naturally curved. When the spontaneous curvature is high, the proteins will include many topological defects during the self assembly, in order to sustain the increasing mechanical stress associated to the assembly. The resulting structure is in this case an icosahedron. On the contrary, when the spontaneous curvature is weak, the mechanical stress is compensated by elongating the shell without including defects. The final capsid is in this a cylinder or a cone.
References: Viral self-assembly pathway and mechanical stress relaxation, Martin Castelnovo,

Molecular mechanism involved in the cholesterol cell transport - 17.01
Bearing the animal in mind - 17.01