Q and A with the experts: Canada’s rising inflation

Economics - Aug 4
Inflation in Canada is at the highest rate we've seen in decades. Jean-Paul Lam, a professor in the University of Waterloo's Department of Economics and former assistant chief economist and principal researcher at the Bank of Canada, says recent events created a perfect storm for inflation.
Innovation - Aug 3

Velocity Science returns to campus and is ready to advance the growth of science-based startups. Velocity - Global advancements in sciences, together with digital transformation, continue to accelerate innovation, significantly impacting all sectors of the economy.

A next-generation diabetes monitor that analyses breath might soon mean no more needle pricks to check blood sugar levels. The device uses gas sensors to measure breath instantly, then links via Bluetooth with a program on a mobile device to give a readout.

Project aimed at rapidly increasing presence of Indigenous and Black academics in engineering and computer science. Office of Research - An innovative new program that provides financial support, mentorship and networking to Black and Indigenous PhD students has been chosen to represent the University of Waterloo in a federal competition for bold and potentially game-changing projects to address persistent systemic barriers in the research ecosystem and academia.

A new report has identified the 10 financial actors with the most influence on the fossil fuel economy and outlines the decisive role they can play in helping de-carbonize our future. The study found that the top 10 most influential actors, including investment advisors, governments, and sovereign wealth funds from around the world, own 49.5 per cent of potential emissions from the world's largest energy firms.

The best and the brightest

New map shows where fracking-induced earthquakes could hit in Canada

Maps help us to better understand and predict induced seismicity during subsurface engineering processes. Scientists from the University of Waterloo have developed a map showing which regions and population centres of Western Canada are likely to experience earthquakes induced by underground energy extraction.

Getting his due after decades

Engineering alumnus belatedly honoured with a hometown mural for his pro football exploits. By Brian Caldwell Faculty of Engineering - More than three decades after leaving to make his mark on the world, an alumnus of Waterloo Engineering has been formally honoured by his Ontario hometown for his athletic achievements.

IC3 changes its name to the Waterloo Climate Institute

New name and strategic plan doubles down on the institute's climate research strengths Waterloo Climate Institute The effects of climate change are being felt around the world and the record-setting heatwaves experienced in many parts of Europe this summer have shined a light on the deadly cost of not taking urgent action.

How digital religion is shaping spirituality among millennials

Waterloo to host a summit on aviation and aerospace

Summit will foster interactions aimed at achieving social, economic, and environmental sustainability The University of Waterloo and the Region of Waterloo will host a Sustainable Aeronautics Summit at the Region's International Airport.

Communitech report highlights Canadian companies with impressive growth - By Jon Parsons University Relations - Nine startups with links to the University of Waterloo were named in a recent report tracking Canadian companies on their way to $1 billion annual revenues, including four companies that grew out of Waterloo's renowned entrepreneurship program and startup incubator Velocity.

Neither snow nor rain

New rankings show calibre outside traditional strengths - By Jon Parsons University Relations - Everybody knows Waterloo is among the best in the world for computer science, engineering and math. Tourism management and water research probably don't come to mind when you think of the subjects where Waterloo excels globally.

Project LEO turns Riverview Highschool students into creators by combining arts and science. By Jude Okonkwo Faculty of Environment - Humans throughout history have dreamed of reaching out and touching the stars. 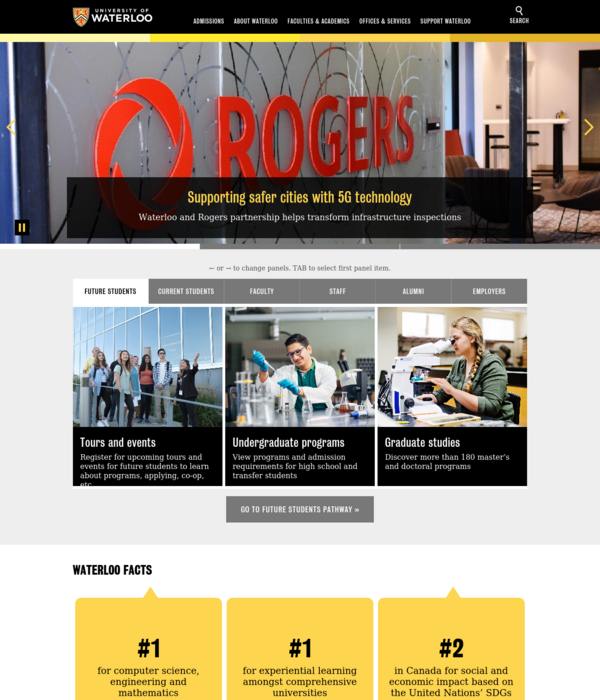